AHMEDABAD: Narendra modi today said he disapproved of any irresponsible statement by “those claiming to be BJP’s well-wishers,” without naming Pravin Togadia and Giriraj Singh, whose controversial remarks have embarrassed the BJP in the middle of the national election.In tweets this morning, Mr Modi said, “I disapprove any such irresponsible statement & appeal to those making them to kindly refrain from doing so. Petty statements by those claiming to be BJP’s well-wishers are deviating the campaign from the issues of development & good governance (sic).” 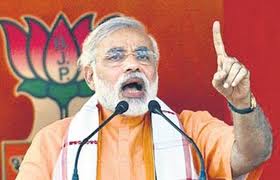 Mr Modi, the BJP’s prime ministerial candidate, took no names but this was his first response to a massive controversy over alleged hate remarks by Pravin Togadia, a leader of the Vishwa Hindu Parishad or VHP, which is a part of the Sangh Parivar, an umbrella of Hindu nationalist organisations that includes the BJP.
In Gujarat’s Bhavnagar, Mr Togadia was seen on camera telling a gathering how to prevent Muslims from buying property in areas where Hindus are in the majority. “We should have it in us to take the law in our own hands in an area where we are a majority and scare them,” he was heard saying.
Mr Modi, who has ruled Gujarat since 2001, is seen to share a fractious relationship with Mr Togadia, his one-time comrade in arms. The two leaders, who rode together to meetings in the 1980s, reportedly fell out after Mr Modi’s second term as chief minister, when he started distancing himself from a radical Hindu agenda.
The VHP leader’s remarks have left the BJP wincing after its candidate from Nawada in Bihar, Giriraj Singh, said at a rally on Saturday that those opposed to Mr Modi “will only have a place in Pakistan”.Congress leader Abhishek Manu Singhvi said, “Are Giriraj Singh and Pravin Togadia not part of a family he criticizes? Why doesn’t Modi expel (Giriraj Singh)? These crocodile tears will not do. People know the truth.”