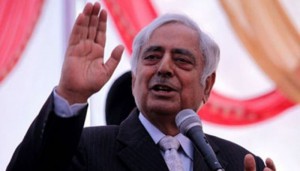 SRINAGAR: Mufti Mohammad Sayeed, 79, the veteran leader of the People’s Democratic Party or PDP, has taken oath as the chief minister of Jammu and Kashmir, bringing to an end the 49-day Governor’s rule in the state. He is leading a historic alliance with the BJP, which has become part of a government in the state for the first time.
Prime Minister Narendra Modi, along with BJP chief Amit Shah, veteran leaders LK Advani and Murli Manohar Joshi and Haryana Chief Minister Manohar Lal Khattar are attending the ceremony, which is taking place at Jammu University’s General Zorawar Singh Auditorium.
A 25-member cabinet has taken oath, BJP’s Nirmal Singh will be the state’s Deputy Chief Minister.Separatist-turned-politician and People’s Conference leader Sajjad Lone has joined the government and taken oath as minister.The other faces in the cabinet include PDP leaders Haseeb Drabu, Abdul Rehman Veeri and Naeem Akhtar and BJP’s Kavinder Gupta and Bali Bhagat.
This is Mr Sayeed’s second stint as the Chief Minister. He held the post between 2002 and 2005 in a rotational arrangement with then ally Congress.
Post-noon, the two parties are expected to release the much-awaited Common Minimum Programme, or CMP, on basis of which they will govern the state.
The parties, ideological opposites, have spent the last two months in attempts to bridge differences that have divided them for decades, which will be reflected in the CMP.
The document is expected to clarify their stand over contentious issues like Article 370, which gives special constitutional status to the state, and the Armed Forces Special Powers Act or AFSPA, which gives the Army the authority to make arrests without warrants.
Former chief minister Omar Abdullah, who skipped the ceremony, tweeted, “Congratulations to Mufti Mohd Sayeed Sb (sic) on assuming the office of CM of J&K. I wish you all the very best for your term as CM.”
In the December elections, J&K voted in a hung assembly. The PDP was the single largest party with 28 MLAs; the BJP was number 2 with 25. Together, they have an easy majority in the 87-member assembly.