VARANASI: The general election reaches a climax today as the BJP’s prime ministerial candidate Narendra Modi seeks a personal mandate in Varanasi, where he is up against Arvind Kejriwal of the Aam Aadmi Party or AAP.Mr Modi is the first prime ministerial candidate to stand in the 3,000-year-old city, where one in six voters is Muslim.A triumph in the city – one of 41 seats in Uttar Pradesh, Bihar and West Bengal which are voting on the final day of  the five-week general election – would crown a gruelling campaign by the 64-year-old chief minister of Gujarat to lead the BJP back to power after a decade in opposition. 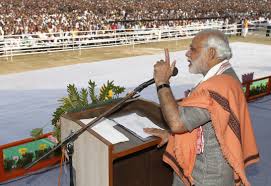 Campaigning mainly on promises to create jobs and restore India to a path of high economic growth, Mr Modi has largely steered clear of religion.His oratory skills and high-tech campaign have made him a solid favourite in opinion polls to unseat the Nehru-Gandhi dynasty from New Delhi – and easily take Varanasi.Mr Modi “will win the election from this Varanasi constituency with a large majority”, BJP President Rajnath Singh told reporters as campaigning wrapped up at the weekend. All other candidates would “lose their deposits”.
The Congress, which has lost popularity after a string of corruption scandals and a sharp economic slowdown, promises to extend welfare policies that helped it sweep into a second term five years ago. “I am confident of giving a tough fight to Narendra Modi,” its candidate Ajay Rai said.The  results of the election are due on Friday.
Whether the BJP will land a straight majority will be the focus of the first TV exit polls due to be released at 6:30 p.m. (1300 GMT). Market rumours that the exit polls would point to a clear BJP victory sent Indian stocks to a record high last week, a sign of investor hopes that Mr Modi would win a clear endorsement for his ‘Gujarat model’ of pro-business policies.
Polls have got it wrong in the past, however, falsely predicting that the BJP would win in 2004. India’s bourse regulator has asked exchanges to test their systems to cope in case there is a sell-off on Tuesday.If the BJP falls short, it could fall hostage to the demands of regional parties who it would need for a coalition.Mr Modi has raised the stakes by attacking regional rivals like Mamata Banerjee that he might need to call on if the BJP-led National Democratic Alliance does fall short of a majority, potentially undermining his bid for the premiership.
Detractors of Mr Modi have questioned his handling of communal riots in Gujarat in 2002, in which more than 1,000 people were killed, most of them Muslims. Mr Modi denies wrongdoing, and a probe ordered by the Supreme Court has found no case for him to answer.The baking streets of Varanasi have witnessed a procession of carnival-style ‘roadshows’ where candidates sought to prove their pulling power among locals whose voting patterns are tied to caste as well as religion.
Rahul Gandhi, whose lacklustre campaign is predicted to end in the worst-ever defeat for the ruling Congress party, drew big crowds on Saturday, in a response to Modi’s campaign stop in his own constituency days earlier. The anti-Modi vote, experts say, will be split between the Aam Aadmi and the Congress.