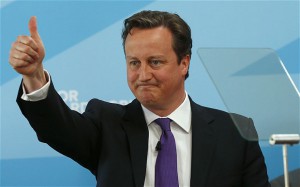 LONDON: The controversy over ‘growing intolerance’ in India refuses to die down. More than 200 writers have now urged British PM David Cameron to ‘safeguard freedom of expression in India’ reported western media on Thursday.
Writers such as Salman Rushdie, Nikita Lalwani, Henry Marsh, Ian McEwan and Val McDermid have written an open letter to David Cameron calling on the British government to take action to protect freedom of expression in India.
The letter, signed by members and supporters of PEN International’s UK-based centres – English PEN, Scottish PEN and Wales PEN Cymru – highlights ‘the rising climate of fear, growing intolerance and violence towards critical voices who challenge orthodoxy or fundamentalism in India’ and urges Cameron to ‘engage with Prime Minister Modi both publicly and privately on this crucial issue’.  PM Modi is scheduled to arrive in the UK on Thursday.
The writers express grave concern over threats to freedom of expression in the country, and highlight the cases of rationalists Narendra Dabholkar, MM Kalburgi and Govind Pansare, who were all murdered in the last two years. The letter claims that the threats and intimidation continues, and that the protests continue to grow.

The writers also say that at least 37 journalists have been murdered in India since 1992.This follows the ‘Award Wapsi’ campaign by Indian writers and intellectuals – at least 40 such individuals have returned their awards to the government in the last few months.

There have been protests both in support and in opposition to these actions, but BJP ministers and individuals from Hindu fringe groups continue to make communal remarks and vitiate the atmosphere.
Modi’s visit to the UK, where he will dine with Queen Elizabeth among other things, is likely to face protests. Here’s the full text of the letter and the list of signatories.
In May 2015, PEN, in partnership with the International Human rights Program (IHRP) at the University Of Toronto Faculty Of Law, published a report documenting the many violations of the right to free expression in the country since Prime Minister Modi’s inauguration and calling on India to repeal over broad laws that enable censorship in the world’s largest democracy.