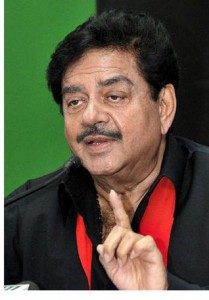 NEW DELHI: BJP MP Shatrughan Sinha on Thursday claimed he had never asserted that the Bihar election results could have been different if he had been made the party’s CM candidate.
Blaming the media, Sinha on Twitter said that it was the media who had created this impression. According to Sinha, he only believed that ‘things could have been better’ if he had been called for campaigning.
Sinha took another shot at the BJP leadership, claiming that despite his sincerity, efforts, and good intentions, the ‘Bihari Babu’ had been kept away campaigning. “My friends, voters, supporters were let down,” he said.The Bollywood star of yesteryear then emphasised his popularity among the masses:
“A more enthusiastic participation of my friends, fans, voters and supporters would’ve certainly helped to make a difference of a few seats,” Sinha opined.Sinha concluded however that now that the Bihar elections had been lost, the party must focus on fixing responsibility for the defeat.
The BJP-led parties lost the Bihar elections in a landslide on Sunday, winning just 58 seats, with the saffron party itself getting just 53. The Mahagathbandhan on the other hand emerged grand victors with 178 seats in the 243-member Bihar assembly.

Earlier, Shatrughan Sinha had hit back at BJP leader Kailash Vijayvargiya for calling him a dog. Barely 24 hours after the party-led NDA was humiliated in Bihar, the dog analogy was used by Vijayvargiya, a BJP General Secretary and a party strategist for Bihar. His comment came just days after he was forced to withdraw his controversial tweets targeting Bollywood superstar Shah Rukh Khan.
In a bitterly fought election between Nitish Kumar and Narendra Modi, the Mahagathbandhan won 178 seats in Bihar, a commanding two-third majority in the 243-member assembly. The Bharatiya Janata Party and its allies had to settle for a mere 58 seats.

Vijayvargiya was on Monday asked to comment on Sinha’s remarks that the poll outcome could have been different had he been projected as the chief ministerial candidate and that those responsible for NDA’s defeat “should be taught a lesson”.

“When a car moves, a dog moves under it too, the dog believes that the car is moving because of me. This party is not dependable on one person, it’s a whole organisation and there’s a big hierarchy here. Those who are out of it were on a ‘Maun Vrat’ and now they are speaking,” Vijayvargiya, a former minister in Madhya Pradesh, said.