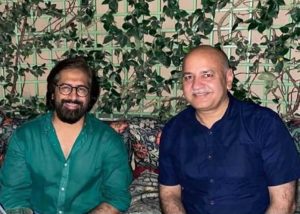 NEW DELHI : Fresh trouble seems to be brewing for Deputy Chief Minister Manish Sisodia as Dinesh Arora, his close aide and an accused in the Delhi`s Excise Policy scam case has decided to turn approver in the case. Arora had earlier moved the CBI court seeking pardon without any coercion from the probe agency. Arora was granted bail in the case last week and the CBI did not oppose it.
The CBI has sought permission from the court to make Arora, currently on anticipatory bail, an approver in the case. The probe agency did not oppose his bail plea. “Arora had close association with the other co-accused and he was actively involved in managing and diverting the undue pecuniary advantage collected from certain liquor licenses to the public servants.

Applying for a grant of tender of pardon, Arora submitted, “I am ready to voluntarily make a true and full disclosure of all the facts pertaining to this case as the same are within my knowledge.” Arora said that he will voluntarily disclose his role in the alleged offences noting that he has already made a confessional statement before the Chief Metropolitan Magistrate and made two statements to the investigating officer.
He himself was not a beneficiary of the alleged amounts received in connection with commission of the alleged offences. Arora cooperated in the investigation,” the CBI said.Sisodia is accused number 1 in the FIR filed by the CBI and was interrogated by the probe agency for over nine hours on October 17.
The CBI investigation into the liquor policy case started barely a few months before the Gujarat assembly elections are to be held. Delhi Chief Minister Arvind Kejriwal has alleged that the centre, with the Lieutenant Governor working as a proxy, wants to harm the Aam Aadmi Party’s (AAP) campaign in Gujarat, the home state of Prime Minister Narendra Modi. Source further revealed that some of the L-1 Licence holders are issuing credit notes to retail vendors with an ab-initio intention to divert the funds as undue pecuniary advantage to Public servants. In furtherance to this, they are showing false entries in their books of accounts to keep their record straight.
Amit Arora, Director of Gurugram based Buddy Retail Pvt. Limited, Dinesh Arora and Arjun Pandey are close associates of Mr Sisodia and are actively involved in managing and diverting the undue pecuniary advantage collected from Liquor Licensees to accused public servants. Sameer Mahendru, MD, Indospirits has transferred an amount of one crore to account no. 10220210004647 of Radha Industries maintained with UCO Bank, Rajendra Place, New Delhi. Radha Industries is being managed by Dinesh Arora, the sources further said.
Arun Ramchandra Pillai used to collect undue pecuniary advantage from Mahendru for onward transmission to accused public servants through Vijay Nair. Arjun Pandey has once collected a huge cash amount of about Rs 2-4 crore from Mahendru on behalf of Nair. “Mahadev Liquors, a proprietorship firm was granted L-1 License. Sunny Marwah is the authorised signatory of the firm. Marwah is also a director in companies being managed by the family of Late Ponty Chadha. Marwah is in close contact with accused public servants and has been regularly giving undue pecuniary advantage to them,” the CBI said.
The FIR alleged that Sisodia’s “close associates” Amit Arora, director of Buddy Retail Pvt. Limited in Gurugram, Dinesh Arora and Arjun Pandey were “actively involved in managing and diverting the undue pecuniary advantage collected from liquor licensees” for the accused public servants. The CBI is also questioning Raghava Reddy, the son of YSRCP Lok Sabha MP Magunta Sreenivasulu Reddy, in the case, officials said.
Delhi Lieutenant Governor Vinai Kumar Saxena had recommended a CBI probe into alleged irregularities in the formulation and execution of the Delhi excise policy, which was brought out in November last year.
The Delhi government had come out with a new policy for selling liquor in the national capital. The Lieutenant Governor red-flagged it over alleged corruption and told the CBI to look into it. The Kejriwal government cancelled the new policy and reverted to the old one. He has said the AAP government lost thousands of crores in precious revenue due to the Lieutenant Governor’s intervention, which happened before the new policy could show results.
“The excise policy of AAP (Aam Aadmi Party government) was supposed to generate revenue of ₹ 4,000-Rs 5,000 crore but just two days before its implementation the LG (Lieutenant Governor) made many changes to it due to which 300-400 shops could not be opened. Their licence fees and revenue did not come. This is the reason behind less revenue,” Mr Kejriwal  told reporters on October 31.
(Bureau Report with Agencies Inputs).