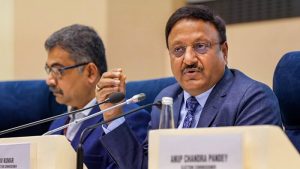 NEW DELHI : The Election Commission of India (ECI) on Thursday announced the schedule for the upcoming Gujrat assembly elections. Gujrat Legislative Assembly has a total of 182 assembly constituencies, with 92 being the majority mark.
two-phase polls in Gujarat on December 1 and 5, the Election Commission today denied allegations of “bias” and said there were “multiple reasons” for the delay in election dates for the state. The Gujarat bridge tragedy was one of them, said the election commission chief.

Chief Election Commissioner Rajiv Kumar said the Gujarat election dates are well within schedule. The votes in Gujarat will be counted on the same day as Himachal Pradesh – December 8 – despite the two-week gap in the announcement of dates for the two states. “The Election Commission’s impartiality is a proud legacy. We are 100 per cent impartial,” he said.
“There are several factors in deciding the polls – weather, the date of the last term of the assembly, the tradition of Gujarat and Himachal Pradesh results together. We have to balance a lot of things. We are well within time.” The BJP, which has been in power in Gujarat for more than 20 years, is looking to retain the state for another five years. The other prominent political parties in the fray are Arvind Kejriwal’s Aam Aadmi Party (AAP) and the Congress. The term of the Gujarat Legislative Assembly ends on February 18 next year. As per the Constitution, a new Assembly should be constituted before the expiry if the current Assembly.
The state is set to witness an intense electoral battle between the Congress, the Bharatiya Janata Party (BJP) and the debutante Aam Aadmi Party (AAP). The BJP has been in power for 27 year in the state, home to Prime Minister Narendra Modi and Home minister Amit Shah. While the AAP has released the names of over 100 candidates so far, the BJP and the Congress have not released any names yet.
Earlier, the Himachal Pradesh election dates were made public by the ECI. Rajiv Kumar, the state’s chief election commissioner, announced that voting will take place on November 12 and that results will be tallied on December 8. The BJP will seek to break the three-decade trend of no ruling party returning to power by defeating the main opposition Congress in the hill state in the elections for the 68-member Assembly with over 55 lakh eligible voters.
“The EC goes by convention in announcing poll schedules. It has decided to go by the convention which was last followed,” Kumar had told reporters when asked why Gujarat polls were not announced.Kumar asserted that polls in one state would not affect elections in the other as “there is a gap of 40 days” in the qualifying dates of the state assemblies of Himachal Pradesh and Gujarat. The term of the Himachal Pradesh assembly ends on January 8, 2023.
Ahead of the announcement, the Congress had jabbed the Election Commission with a tweet that appeared to accuse the poll body of partiality. “The Election Commission of India is an autonomous institution. It conducts fair elections,” the Congress tweeted. “Some try to create a negative atmosphere… Actions and outcomes speak louder than words. Results have shown that those who are critical got surprising results. People question EVM but when results are in their favour, they go silent,” the CEC countered.
The Model Code of Conduct will be in place in Gujarat for 38 days, which is among the shortest periods. “That is the same as the Delhi election,” Mr Kumar said. “The tenure of the Gujarat assembly is till February 18, so there is still time. There is a 72-day gap between the counting day and the day the Gujarat assembly term gets over.”On whether announcements to help the survivors of the Gujarat bridge tragedy could clash with the election code of conduct, Mr Kumar said: “If the level-playing field is disturbed by any decision, the Election Commission will take action.”
(Bureau Report with Agencies Inputs).