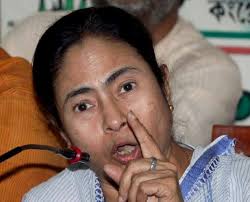 KOLKATA: Once in Murshidabad’s Lalbag, a Congress stronghold in South Bengal, Trinamool Congress leader Mamata Banerjee, rolled out severe attack on the Congress and BJP indicating that doors for the future negotiations during post-elections talks should be banished between her party and big players.
Her speech assumed importance on two counts: Like despite her considering Muslims as her major vote power, she would not listen to Imam of Kolkata’s Tipu Sultan Masjid (who asked her for a tie-up with Congress to prevent BJP’s Narendra Modi) nor she would go with later “as by supporting Gorkha Jan Mukti Morcha in seeking their support for their candidate in Darjeeling, “they plan to split Bengal.’’
“We have seen them during elections: Congress uses BJP in their propaganda `war’ as communal villain and BJP’s which uses Congress as villain of the piece,’’ Mamata Banerjee told an audience. “See what these two did in dividing Andhra Pradesh recently, they even did not allow voting,’’ she said, adding, “even CPI(M)’s worked out a tacit support for Andhra’s division.’’
“Do not waste your votes by bringing the traitors, if you vote for BJP they would divide Bengal with the help of Congress and CPI(M),’’ she added.
Then of course came the issue of Congress-led UPA II conspiring against the Murshidabad District (an agricultural belt) by not timely repairing the dam on Ganga and how extra water went to Bangladesh. “This led to great suffering for farmers who irrigate their land with Ganga water, and none of the Congress MPs from Murshidabad protested against Centre’s designs in Parliament,’’ she quickly added.
While extra Ganga water flowing into Bangladesh becomes a national issue, the issue of price rise and economic suffering it inflicts on the common man gave state Congress no peace either.A senior Trinamool Congress leader told Newstrack while: “She left about the doubts what would be TMC’s role during post-election talks, it left the State Congress without any weapon to strike back in Murshidabad.’’
However, political observers here feel that “nation-wide BJP wave’’ may also have led to her tension as she “fears if they could do nothing, they might eat up TMC vote to help Congress and CPI(M).Though while the Congress yet to launch their campaign, CPI(M) began it with a thrust targeting Banerjee’s party.