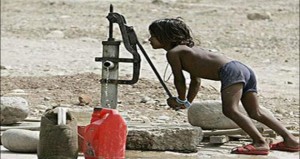 BANGALORE: Karnataka requires a staggering Rs 52,000 crore to tide over its drinking water crisis. Of the 59,753 habitations in the state, 32,000 face a shortage.“We are completely dependent on borewells, which are either drying up or supply contaminated water,” water resources minister HK Patil told the assembly on Wednesday. He was replying to Basavaraj Rayaraddi of the Congress.
In the southern region, Kolar , Chikkaballapur, Chitradurga, Bangalore rural, Ramanagaram and Tumkur are the worst affected districts , while in the north, it is Bidar, Raichur, Bellary, Gulbarga, Gadag and Bijapur. More than half the state’s 6.13 crore population is affected. The state is the second most drought-prone in the country, after Rajasthan.
Rayaraddi wanted to know how the government intends to address the colossal problem. “According to a study commissioned by the government , the state requires at least 65 tmc (thousand million cubic. One tmc means 2831 crore litres of water) of water to mitigate the crisis. And there is no provision to draw additional water from rivers like Cauvery and Krishna ,” Rayaraddi rued. Annually, Bangalore city is supplied with 19 tmc.
Acknowledging the magnitude of the problem, Patil said a study had been commissioned to ascertain water sources, requirement and utilization methods.511 girls sold last yearAs many as 511 girl children were sold in Karnataka last year, women and child development minister Umashree said in a written reply to MLA V Sunil Kumar. Bangalore Urban district tops the list with 277 reported cases, followed by Mysore with 34 cases. The only two districts that haven’t reported any case are Yadgir and Koppal. She said that the number of incidents was increasing in the state.