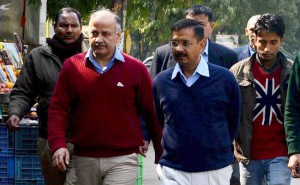 NEW DELHI :  Arvind Kejriwal, who will take charge as Delhi’s chief minister on Saturday, is likely to have a deputy. Manish Sisodia, a 43-year-old former journalist who is the number 2 of the Aam Aadmi Party, is set to be Delhi’s first Deputy Chief Minister, say sources.
Somnath Bharti, the former law minister who came to symbolize the political inexperience of AAP in its previous 49-day stint in Delhi, has been dropped, sources say. Mr Bharti’s midnight raid targeting African women at a south Delhi colony badly dented the government’s image but Mr Kejriwal did not sack him then.
Others likely to find a place in the Delhi cabinet are Gopal Rai, Jitendra Tomar, Sandeep Kumar and Asim Ahmed Khan. Rakhi Bidlan, who was the only woman in the previous cabinet, has also been dropped.
Mr Sisodia’s elevation is being seen as part of AAP’s long-term strategy to have someone in charge when Mr Kejriwal takes the party’s campaign beyond Delhi. He has accompanied Mr Kejriwal to every meeting that has followed AAP’s spectacular victory in the Delhi election.
The two leaders met Prime Minister Narendra Modi this morning.
On Wednesday, in meetings with Union Ministers Rajnath Singh and Venkaiah Naidu, they brought up their demand for full statehood for Delhi, which currently has no control over land, police and bureaucracy.
As the shape of the new cabinet emerged this morning, Mr Sisodia spoke on AAP’s priorities, which include slashing electricity bills and providing 700 litres of water free to every home.
“In the first few days, we will take decisions related to water and power. That is our commitment to Delhi,” he said, adding, “The work that can be done in one day will be completed in one day.”
On Tuesday, AAP won a historic mandate to return to power in Delhi, winning 67 of 70 seats in assembly polls and decimating the BJP and the Congress.
On Saturday, exactly a year to the day he resigned, Mr Kejriwal will be sworn in as Chief Minister for the second time at the Ram Lila Maidan.