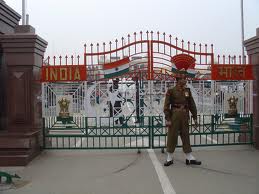 The much anticipated meeting between Director Generals Military Operations of India and Pakistan began on Tuesday along the Wagah-Attari border to work out a mechanism to ease tension and ensure peace at the Line of Control.

The Indian side is led by Lt General Vinod Bhatia while Major Gen Aamer Riaz is heading the Pakistani side.

A Brigadier and three Lieutenant Colonels from each side are also participating in the talks.

Official sources here said that the meeting was scheduled to take place on the ‘No Man’s Land’ at the Wagah-Attari border.

Pakistan military in a statement said that the decision for holding meeting between Pakistan and Indian DGMOs was taken on political level.

The DGMOs will discuss issues pertaining to tension on LoC and other related issues on the working boundary with a focus to maintain ceasefire and bring normalcy.

The DGMOs of the two nations are meeting for the first time in 14 years. They last met in 1999 after the Kargil war.

India is expected to forcefully convey to Pakistan the importance of maintaining ceasefire at the LoC.

Pakistani media reports have said Islamabad is expected to seek a bigger role for UN military observers deployed along the Line of Control.

UNMOGIP was established in 1949 under the resolution passed by the world body’s Security Council to supervise ceasefire along the LoC.

Pakistan had initially proposed to include the Foreign Ministry officials in the meeting of senior military officials but India had rejected it.

However, Pakistan Foreign Office had said last week, “For the time being, this meeting will be between the DGMOs but our proposal is still on the table”.