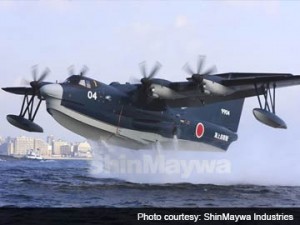 NEW DELHI : India is set to become the first country since World War Two to buy a military aircraft from Japan, helping Prime Minister Shinzo Abe end a ban on weapons exports that has kept his country’s defence contractors out of foreign markets.
The two countries are in broad agreement on a deal for the ShinMaywa Industries amphibious aircraft, which could amount to as much as $1.65 billion, Indian officials said on Tuesday.However, several details need to be worked out and negotiations will resume in March on joint production of the plane in India and other issues.
New Delhi is likely to buy at least 15 of the planes, which are priced at about $110 million each, the Officials said.
“Its a strategic imperative for both sides, and it has been cleared at the highest levels of the two governments,” said an Indian military source.
For the moment, a stripped-down civilian version of the US-2i search and rescue plane is being offered to India, to get around Japan’s self-imposed ban on arms exports. A friend or foe identification system will be removed from the aircraft, another defence official said.
The two countries are discussing assembling the aircraft in India, giving India access to Japanese military technology, Indian Prime Minister Manmohan Singh has said.
The plane has a range of over 4,500 km (2,800 miles), which will give it reach far into Southeast Asia from the base where the aircraft are likely to be located, in the Andaman and Nicobar island chain that is near the western tip of Indonesia.
The two governments have set up a joint working group that will meet in March to consider plans to either set up a plant in India to assemble it under licence by an Indian state manufacturer.
The plan is to deliver two aircraft and then assemble the rest of the planes with an Indian partner, the military source said.
The deal lays the ground for a broader Japanese thrust into India, the world’s biggest arms market dominated for long by Russia but also now buying hardware from Israel and the United States.”There is a whole amount of defence-related cooperation, between India and Japan,” said Gautam Bambawalle, an Indian foreign ministry official responsible for North Asia. “We want Japanese technology, we want Japanese capital investment into India.”
WEEKEND TRIP
India’s navy is also interested in Japanese patrol vessels and electronic warfare equipment as Tokyo moves further along in easing its ban on military exports, the Indian officials said.
Abe discussed the aircraft deal with Singh during a trip to New Delhi last weekend as ties rapidly warm between the two nations at a time when both are embroiled in territorial disputes with China.
“Our Joint Working Group on US-2 amphibian aircraft has met to explore the modalities of cooperation on its use and co-production in India. More broadly, we are working towards increasing our cooperation in the area of advanced technologies,” Singh said.
Abe is seeking a more assertive military and national security posture for Japan, whose post-war constitution, written by U.S.-led occupation forces, renounces war and a standing army.

Mitsubishi Heavy is in advanced talks to supply parts for the F-35 stealth fighter to Britain’s BAE Systems, in what would be the first involvement of a Japanese manufacturer in a global weapons programme, according to people with knowledge of the discussions.

India is a top market for defence hardware, buying some $12.7 billion in arms during 2007-2011, according to the Stockholm International Peace Research Institute (SIPRI), everything from basic military goods to an aircraft carrier.

New Delhi been trying to build up a domestic manufacturing industry and has leaned on foreign suppliers to consider transfer of technology or joint production as a condition for placing orders.