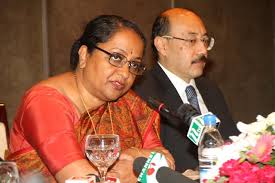 NEW DELHI : India called off the Foreign Secretary level talks scheduled between the two countries on August 25 in Islamabad on Monday after Pak High Commissioner Abdul Basit’s decision to meet separatist leaders from Kashmir at Delhi.
The moderate Hurriyat faction had on Sunday said that Hurriyat Conference Chairman Mirwaiz Umar Farooq had been invited by the Pakistan High Commission for consultations in Delhi on August 19, following which India called off the Foreign Secretary level ta
It is reported that the Indian Foreign Secretary Sujatha Singh informed Pakistan High Commissioner that her talks with Pakistan counterpart on August 25 in Islamabad now stand cancelled.The condition for the talks was “India or separatists”, said sources; but Pak’s top envoy went ahead with the meeting.Upon this breach, India conveyed its displeasure, and said, “Under the present circumstances,…No useful purpose will be served by the Indian Foreign Secretary going to Islamabad next week.”
“At a time when serious initiative was taken to take bilateral ties forward, invite to Hurriyat leaders raises questions about Pak’s sincerity.”Talking to scribes over the matter, Syed Akbaruddin, Official Spokesperson of Ministry of External Affairs, said, “Indian Foreign Secretary had conveyed to the Pakistan High Commissioner (Abdul Basit) today, in clear and unambiguous terms, that Pakistan’s continued efforts to interfere in India’s internal affairs were unacceptable.”
“It was underlined that the Pakistani High Commissioner’s meetings with these so called leaders of the Hurriyat undermines the constructive diplomatic engagement initiated by Prime Minister Modi in May on his very first day in office,” he added.
“Pak High Commissioner’s meeting with so called Hurriyat leaders undermined the constructive diplomatic arrangements made by PM Modi,” the MEA spokesperson added.
India has cancelled talks with Pakistan scheduled for next week in Islamabad, stating that “Pakistan’s continued efforts to interfere in Indian internal affairs are unacceptable.” Pakistan responded by saying such parleys with Kashmiri separatists before talks with India is a “long-standing practice”. (Read More)
Here’s Your 10-Point Cheat-Sheet to This Story:Foreign Secretaries of both countries were to meet on August 25 in Islamabad.But Pakistani High Commissioner Abdul Basit invited Kashmiri separatists to meet with him in Delhi for “consultations” ahead of those talks, infuriating India.”Under present circumstances, it seems no useful purpose will be served by the Foreign Secretary visiting Islamabad, therefore the visit stands cancelled,” said Syed Akbaruddin, spokesperson for the Foreign Ministry. (Political Reactions After India Calls Off Talks With Pakistan)The government say that Indian Foreign Secretary Sujatha Singh had phoned the Pakistani High Commissioner to warn, “Either talk to separatists or talk to us.” Pakistan Foreign Office said that the Indian decision is a setback to efforts by our leadership to promote good neighbourly relations.
“It is a long-standing practice that prior to Pakistan- India talks, meetings with Kashmiri leaders are held to facilitate meaningful discussions on the issue of Kashmir,” it said in a statement. (Read More)The Pakistani envoy had sought meetings with Hurriyat Conference Chairman Mirwaiz Umar Farooq, chief of its hardline faction Syed Ali Shah Geelani and senior separatist leader Shabir Ahmad Shah, who floated the third faction of the amalgam last year. Pro-independence JKLF chairman Mohammad Yasin Malik has also been invited for the discussions.Last week, Prime Minister Narendra Modi visited Kargil, where India and Pakistan fought a war in 1999, and accused Pakistan of using terrorism to wage “a proxy war” in India.
His comments came amid new tension along the Line of Control or the de-factor border in Jammu and Kashmir. Pakistan denied the allegations and retaliated by saying India should not practice “a blame game.” After he swept the national election in May, PM Modi surprised many by inviting his Pakistani counterpart Nawaz Sharif and other South Asian leaders to his swearing-in ceremony.
The meeting between the two premiers led to a decision for talks between their Foreign Secretaries.The Opposition Congress has been charging Mr Modi with failing to react to incursions and infractions by Pakistan in Kashmir. The party says the PM, who was quick to accuse the previous government of being too soft on Pakistan, has failed to take a firm stand with Islamabad since coming to power.