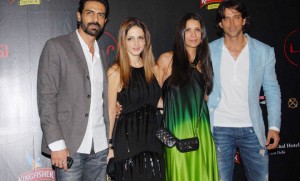 Mumbai :Bollywood superstar Hrithik Roshan shocked fans when he publicly announced that he and wife Sussanne have decided to end their 17-year-relationship.

Though the couple have officially announced their separation, rumours of their marriage being on the rocks have been doing the rounds for a few months now.

Some even suggested that the cause of the split may have been Sussanne’s increased closeness to actor Arjun Rampal. Hrithik and Sussanne Roshan have been known to be close friends with Arjun and his wife Mehr.

However, Arjun Rampal issued a statement denying any involvement in the separation.”It is very sad when friends close to you take a decision to separate. These are the hardest times for them and we must be sensitive towards this decision, rather than creating speculation and rumours. I read in the news, about the same time as you all, about my involvement in this marriage. It saddens me deeply that rumours become inevitable during celebrities going through such times. Mehr and I wish them only peace and love through these times, and support them as friends should, and we wish them and their families well, always.”

Sussanne Roshan also issued a statement a few days earlier, saying that their main concern was to protect and take care of their two children, Hrehaan and Hridhaan.