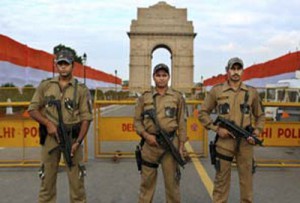 NEW DELHI : Four states including Maharashtra, Rajasthan, Odisha and Uttar Pradesh have been put on high alert after Intelligence Bureau warned that terrorists operating from Pakistan are planning an attack in the month of January, reports said on Thursday.
Reports say that Pakistan-based terror outfits Jamaat-u-Dawa (JuD), Jaish- e-Mohammad (JeM) and Hizbul Mujahideen (HM) have dispatched four groups to India for carrying out terror attacks in significant areas.
The terrorists, as per the inputs gathered by the IB, have already infiltrated into the four concerned states.Mumbai’s famous Siddhivinayak Temple is on the terrorists’ radar and has been put under tight vigil.
Security has been tightened across India ahead of Republic Day celebrations on January 26.An extra vigil is being mounted in border towns as security agencies fear militant attacks from across the border ahead of US President Barack Obama’s visit to the country.
Obama will be the first US President to attend a Republic Day celebration. He is the only US President to visit the country twice while in office.
Security officials have earlier warned that around 200 militants are waiting to cross over from across the border.
Delhi Police is installing 15,000 CCTV cameras as part of security arrangements to ensure full security for US President Barack Obama, who will be the Chief Guest at the Republic Day celebrations. Over 45,000 personnel from Delhi Police and paramilitary forces will also be on the streets of the capital on January 26, officials said.
Sources said the central, north and New Delhi districts will be manned by over 20,000 security personnel, including men from the SPG.The airspace over the capital will be monitored by a special radar, they said.