NEW DELHI: Social activist Anna Hazare, who is spearheading agitation against amendments in the Land A 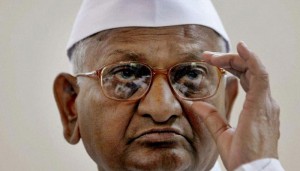 cquisition Act, Wednesday rubbished Government’s claim that these were more “effective” and “farmer-friendly”, saying it was trying to mislead the people.
Hazare said the BJP government has misled people on several fronts including the black money issue and decentralisation of power, while asking for votes in the run-up to the Lok Sabha elections.The Gandhian activist threatened to go ahead with a nation-wide ‘jail bharo andolan’ if the government does not pay heed to the demands.
He added that the earlier UPA government was brought down by the anti-corruption agitation led by him and also claimed to have taken “6 wickets”, an apparent reference to six Cabinet ministers in Maharashtra, who had to resign because of his agitation against them.
“The government is more worried about the industrialists and not about farmers. The country has woken up now. These people will also take irrigated land and give it to the industrialists,” Hazare said.He was addressing a large number of farmer activists, who reached Jantar Mantar, a day late for the protest.
Hazare said that there are many clauses in the Ordinance which are not in the farmers favour, one of which is not seeking consent of 70 per cent of the farmers.”Under the new law, if farmer’s land is acquired, he cannot approach the court unless the government permits him. Going to court is the fundamental right of every individual,” the social activist said, adding that he will form a committee of 8-10 people to decide the future course of action at the national level.
“We will give you (people) a call of jail bharo andolan after deciding on future course of action. It is only then that people government will wake up to our demands.”The government is currently under the influence of power and needs to be shown its place …The kick power gives is more dangerous than the kick one gets from consuming alcohol,” Hazare said.
At the meeting of the BJP Parliamentary Party yesterday, Prime Minister Narendra Modi said the bill will benefit farmers and that the amendments brought by his government were based on suggestions and demands made by Congress-ruled states and their chief ministers. He had asked party MPs to “bust the myths” propagated by Opposition parties on it.
Attacking the Modi dispensation, Hazare said it had promised to decentarlise power but has done the opposite.”You (Centre) should have asked the gram sabha, which is bigger than the Lok Sabha or Rajya Sabha about the changes. Government is trying to strangulate the gram sabha, and thereby democracy, by bringing in this ordinance. People’s parliament is bigger than country’s Parliament.
“He (Modi) claimed that black money will be brought back to the country and every bank account will receive Rs 15 lakh, but people haven’t even received Rs 15 since last nine months,” he said,” Hazare said.