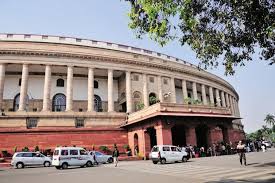 NEW DELHI: The government tabled the controversial land ordinance in the Lok Sabha amid loud protests and slogan-shouting by the Opposition today, the first day of the second part of the Budget session.
The Modi government is determined to push in this session, much legislative business that its economic reforms agenda rides on, including the land acquisition bill. The Congress-led Opposition is determined to derail the bill, which it calls “anti-farmer.”The Congress is reaching out to farmers in an attempt at a political revival.
On Sunday, Congress vice president Rahul Gandhi told farmers at a rally that he would fight for them against the Modi government’s land bill.
Today, he will make a rare speech in the Lok Sabha in a discussion on the agrarian crisis in the country. This will be Mr Gandhi’s first speech since his party lost power at the centre in May last year.This morning, External Affairs Minister Sushma Swaraj’s statement on the recent evacuation operations from strife-torn Yemen was drowned out by a boisterous Opposition, which raised slogans of ‘kisan bachao, desh bachao (save the farmer, save the nation)’ – referring to the land bill.
The Congress also protested over racist comments made recently by union minister and BJP lawmaker Giriraj Singh about party chief Sonia Gandhi earlier this month, forcing a brief adjournment. Mr Singh later apologised in the House for his remarks.
Arriving at Parliament today, Prime Minister Narendra Modi appealed for the support of all political parties “so that in the second session the nature of talks will be positive.” In a tweet early morning, he said he looked forward to a “productive session, filled with constructive debates on several issues.
“While the Lok Sabha reconvened today, the Rajya Sabha will start a new session from Thursday, April 23. It was prorogued to allow the government to issue a new ordinance or emergency order on land acquisition, incorporating nine amendments cleared by the Lok Sabha in the first part of the Budget session.
The so called Janata Parivar – six parties that have merged this week and are yet to announce a name – joined the Congress in slamming the land bill. Chairman Mulayam Singh Yadav said, “This bill is not mere anti-farmers but anti-national too. Population of country is increasing and land is decreasing”.
The Modi government’s land bill aims at making the acquisition of land for industrial and infrastructural projects easier. The Congress says any shift from the law its government brought in 2013 is a betrayal of farmers.
Among other important bills it wants to clear in this session are Goods and Service Tax (GST), Undisclosed Foreign Income and Assets (Imposition of Tax) and Real Estate (Regulation and Development) bill. The Budget session ends on May 18.