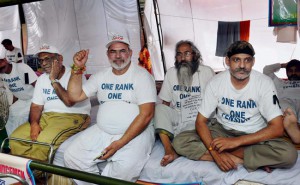 NEW DELHI: The government is likely to announce the implementation of the long-awaited One Rank One Pension or OROP today, sources have said. Protesting veterans, who are meeting Defence Minister Manohar Parrikar, said they will make their next course of action known after that meeting.
The National Democratic Alliance government is likely to make an announcement about ‘One Rank, One Pension’ on Saturday. Notably, ex-servicemen have made it clear that the government’s unilateral decision would not be accepted.
According to a news channel, the OROP scheme is expected to be announced by Defence Minister Manohar Parrikar at around 3 pm.

Meanwhile, Major General Satbir Singh (retd), chairman of the Indian Ex-Servicemen Movement, told reporters that the delegation will meet Parrikar at 11:30 am with an open mind. Singh added that he will address media about the outcome of the meeting at 1 pm.

The possibility of an announcement was being talked about in official circles, although ex-servicemen maintained that there was no agreement on revision of pension.
The ex-servicemen have indicated that they may accept a revision every two years but the government has been insisting that equalisation will happen once in five years.
The ex-servicemen, who have been agitating for the last 82 days, said they will not accept review of the pension after every five years.

It is understood that a draft proposal on OROP was circulated at a RSS meeting yesterday which envisaged commencement of the scheme from July 2014, besides revision of pension every five years.

“If not, then the unilateral declaration is unacceptable to us. We will intensify our protests,” Major General Satbir Singh (retd), Chairman of Indian Ex-Servicemen movement had said.
Singh said the OROP should be implemented from March 31, 2014 and they will not accept if it is done from July, 2014.
He claimed the government has to only spend Rs 30 crore for six-consecutive years for “equalisation of pension”.
“If the government can spend Rs 60 crore on giving subsidy to Parliament canteen, then I have nothing to say,” he said.
The OROP has been stuck for a while despite hectic back channel talks between the government and the veterans.
Col (Retd) Anil Kaul, media adviser to the United Front of Ex-Servicemen, had said that cost of implementing OROP will come to around Rs 8,294 crore. The figure, he said, has been worked out by “three service pay cells and figures estimated by the Ministry of Defence.”
Close to 26 lakh retired servicemen and over six lakh war widows stand to be immediate beneficiaries of the scheme, which envisages a uniform pension for the defence personnel who retire in the same rank with the same length of service, irrespective of their date of retirement.
Currently, the pension for retired personnel is based on the Pay Commission recommendations of the time when he or she retired. So, a Major General who retired in 1996 draws less pension than a Lt Colonel who retired after 1996.