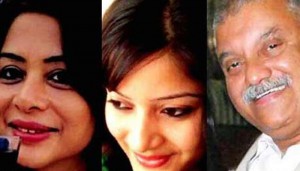 MUMBAI: In a yet another revelation in the sensational Sheena Bora murder case, media reports on Friday said that the victim’s mother and the prime accused Indrani did make-up of her victim daughter before taking her to the Pen forest area of Raigad where she was dumped into a suitcase and put on fire.
Indrani applied lipstick and combed the hairs of Sheena’s corpse so that no one could suspect foul play.
Investigators probing the alleged murder of Sheena Bora had earlier said that accused Indrani Mukerjea and and her ex-husband Sanjeev Khanna allegedly placed her body between them on the rear seat of the rented vehicle as they drove from Mumbai to Raigad to dump it there. The police claim that the duo did not leave the body in the boot fearing police check points.
Meanwhile, the digital superimposition of the profile of Sheena Bora has matched with the skull recovered from a forest in the neighbouring Raigad district, Mumbai police said today, and maintained it has not yet given a “clean chit” to former Star India CEO Peter Mukerjea in the case.
The matching of digital superimposition with skull would be important in establishing that the human remains found in the forest in Pen tehsil of Raigad are of Sheena, the daughter of Indrani Mukerjea, Peter’s wife.
Indrani, her former husband Sanjeev Khanna and her former driver Shyamvar Rai have been arrested on the charge of murdering Sheena and disposing of the body in a Raigad forest in April 2012.
“Digital superimposition of Sheena’s profile has matched with the skull found in Raigad forest,” a senior officer of Mumbai police said this evening.
The officer, replying to a question, also said, “We haven’t given any clean chit to Peter yet.
Peter Mukerjea, though not an accused, was questioned extensively today at the Khar police station for the third day in a row in Sheena murder case.Police are also probing Peter and Indrani’s financial transactions and yesterday he was accompanied to the police station by his CA.
The car used to take Sheena’s body to Raigad has been traced to a third-party owner, the officer said.Further, police had also found out that an employee of Indrani’s company sent emails in Sheena’s name after her murder, he said.
Yesterday, the police had claimed that Indrani confessed to murdering Sheena and that they were probing the financial transactions of Indrani and Peter.Sheena was allegedly strangulated to death, with the help from driver SP Rai and Sanjeev Khanna on April 24, 2012.
During interrogation, Rai had said that he had helped Indrani in disposing of the body by dumping it in the forests of Raigad district.