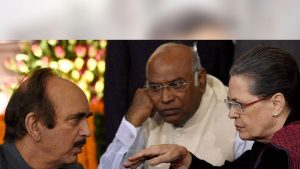 NEW DELHI/ SRINAGAR: Senior Congress leader Ghulam Nabi Azad resigned from a key party post in Jammu and Kashmir Congress, hours after he was appointed the chairman of the J&K  Campaign Committee. signaling a revolt within. Incidentally, Ghulam Nabi Azad is one of the 23 senior Congress leaders who wrote to Sonia Gandhi in August 2020 regarding the uncertainty over the leadership and the drift in the party. Azad, who retired from the Rajya Sabha last year, was not re-nominated to the upper house by the Congress.
The letter reportedly mentioned many suggestions such as the need for a full-time leadership available at the national and state headquarters, conducting elections at all levels including the Congress Working Committee and state level, the formation of an Independent Election Authority, and institutional leadership mechanism to guide the party’s revival. In February 2021, the ex-J&K CM also faced protests for praising PM Modi.
Made the chairman of the party’s campaign committee, he stepped down from the post shortly after his appointment. He has also resigned from the party’s Jammu and Kashmir political affairs committee. Sources indicated that Mr Azad saw the appointment as a demotion as he is already a member of the party’s all-India political affairs committee. A veteran leader, he is also a former Chief Minister of the erstwhile state, served as an union minister and held many important party posts.
The resignation of Mr Azad came shortly after his close aide, Ghulam Ahmed Mir, was dropped from the post of the chief of the party’s Jammu and Kashmir unit. Mr Mir had stepped down last month. The party had effected a thorough organisational shake-up in the Union Territory and appointed Vikar Rasool Wani in place of Mr Mir.
According to sources, Azad’s appointment was viewed as a demotion from his existing role as a member of the All India Political Affairs Committee of the AICC. According to agency reports quoting sources, Azad cited health reasons to decline the offer. This is the latest from Azad, who has been a part of the G-23 members, who have voiced their dissent against the Congress leadership demanding a ‘collective and inclusive leadership’ for the grand old party.
The move comes shortly after Congress president Sonia Gandhi appointed Vikar Rasool  Wani as J&K Unit chief of the party and Raman Bhalla as the working president. In a major reorganization, Gandhi, on Tuesday, constituted the campaign committee, political affairs committee, coordination committee, manifesto committee, publicity and publication committee, disciplinary committee and Pradesh election committee of the J&K unit.
The campaign committee, which was formed by Gandhi had 11 members with Azad as the chairman. His resignation also comes shortly after his close confidante Ghulam Ahmed Mir resigned from the post of Jammu and Kashmir Pradesh Congress Committee (JKPCC) president.
The latest reshuffle in party posts has reportedly angered many in J&K Congress.
“We’re unhappy as senior leaders weren’t consulted before taking decision on J&K PCC chief. We’ve resigned from party’s coordination committee as protest against recent announcements of PCC chief. I’ve resigned from Congress’ primary membership,” Congress ex-MLA Haji Abdul Rashid Dar said news agency ANI quoted. The assembly elections in Jammu and Kashmir will be held after the finalisation of electoral rolls and completion of the delimitation exercise. There is, however, concern that the polls cannot be held this year as delimitation and electoral rolls revision cannot be completed before the deep winter sets in. A timeline for the election is yet to be announced.
The Election Commission, however, has recently revised the date of final publication of voters list to November 25. This would be the first voters’ list of the Union Territory after the boundaries of assembly seats were redrawn in the delimitation exercise. Heaping praises on PM Modi in his address on February 28, 2021, Azad said, “I like a lot of good things about many leaders. I come from a village and I am very proud of it. Our Prime Minister also admits that he comes from a village, and even though we are against each other in politics, but he doesn’t hide his reality, his roots. If you try and hide your reality, then you are living in a false world.”
Speculation about his closeness to the ruling dispensation also gained traction after he was conferred with Padma Bhushan, India’s 3rd highest civilian award. Two more Congress leaders have also resigned from newly formed committees, one being former MLA Gulzar Ahmed Wani also resigned from Pradesh election committee. “I have resigned from Congress coordination committee in J&K as a protest against recent appointment of PCC chief in UT. The decision isn’t in favor of the party,” said Gulzar Ahmad Wani.
(With Inputs from J&K Bureau).