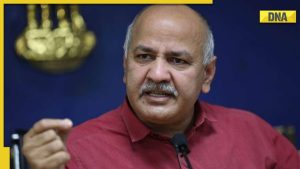 NEW DELHI : The raging point-counterpoint between the centre and the Delhi government over rehabilitation of Rohingya refugees in the national capital reached a fever pitch today with Deputy Chief Minister Manish Sisodia demanding that the centre order a probe into the entire episode. Mr Sisodia alleged a “conspiracy” to settle Rohingya in Delhi, while keeping the Aam Aadmi Party, or AAP, government led by Chief Minister Arvind Kejriwal completely in the dark.
Hours after a controversy erupted over shifting Rohingya refugees to flats with basic facilities in Delhi’s Bakkarwala, Sisodia said the Centre’s conspiracy had been exposed.”The Centre’s conspiracy regarding rehabilitation of the Rohingyas in Delhi was exposed yesterday,” he said.
Addressing the media, Sisodia said though Union minister Hardeep Singh Puri shared the news of the Rohingya refugees being shifted to flats allotted to the Economically Weaker Sections (EWS) category with basic facilities and round-the-clock security in Delhi’s Bakkarwala area early Wednesday via Twitter, Delhi Chief Minister Arvind Kejriwal was not kept in the loop.
Amid the ongoing row over accommodation of Rohingyas in Delhi, Deputy CM Manish Sisodia on Thursday  rejecting the Union Home Ministry’s claim that it was the Delhi government’s proposal, Sisodia had alleged on Wednesday the BJP-led Centre was “secretly” trying to give “permanent residence” to Rohingya refugees in the national capital.
Further, on being asked if the Delhi government is against giving flats to Rohingya refugees or having the refugees in Delhi at all, Sisodia said, “Rohingya and illegal occupants, who are living in the country violating the rules of the country, have to be dealt with by the Centre.”He has written a letter to Union Home Minister Amit Shah urging him to order a probe to ascertain on whose instructions the decision to shift Rohingya Muslims to EWS flats in the national capital was taken.
“If the Centre as well as the Delhi government were kept out of the loop, who was taking these calls?” he asked “If the MHA did not decide this but the Housing Minister Hardeep Puri is lauding the decision; if senior Delhi Police and government officers are holding meetings but the elected government is not being kept in the loop, who is orchestrating this whole thing?” Sisodia added. Dy CM Sisodia claimed the Home Ministry came out with a clarification on the issue on Wednesday only after Union Minister Hardeep Singh Puri’s tweets on the move to shift Rohingyas was opposed by his Aam Aadmi Party and others.
Hours after Puri said that Rohingya refugees in the national capital will be shifted to flats for economically weaker section, the MHA  on Wednesday denied any such move and directed the Delhi government to ensure that “illegal foreigners” remain in detention centres pending their extradition.It also said that the Delhi government “proposed to shift Rohingya Muslims to a new location”.
“When I sought further details about the meetings, I noticed that it was mentioned in the files that for the approval of the central government, the proposal [to rehabilitate Rohingya] was being directly sent through the Union Chief Secretary to the Lieutenant Governor of Delhi. This was completely hidden from the elected government of Delhi. So, why this conspiracy?” Mr Sisodia said.
Manish Sisodia claimed that they found out that several meetings were conducted on the matter, including officials of the Delhi government and the Central government. He said the officials were asked to send the file directly to the Lieutenant Governor (L-G) of Delhi, VK Saxena.“If Rohingyas are considered a threat to national security, how can you consider providing them flats?” asked Sisodia. He further asked, “Who was behind this conspiracy? Why was the Delhi government not informed about these meetings?”He asked, “If the officials surpassed the Delhi government and went against the Centre’s stand, then who was behind the conspiracy?”
Mr Sisodia said neither he nor Mr Arvind Kejriwal had any clue about a plan to move Rohingya to flats earmarked for the economically weaker section, or EWS, in Bakkarwala. Mr Sisodia said though Mr Puri tweeted about Rohingya being moved to EWS flats, Mr Kejriwal was not informed about such a move.