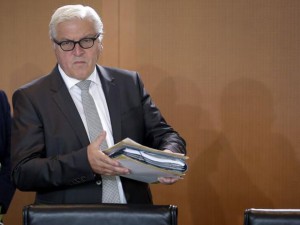 NEW DELHI : With the government’s international engagements in full swing this September, German Foreign Minister Frank-Walter Steinmeier is in the capital ahead of talks with Prime Minister Narendra Modi and External Affairs Minister Sushma Swaraj on Monday. In an interview to the Hindu, Dr. Steinmeier, who is accompanied by a business delegation, says the visit is as much to discuss areas of international cooperation as to find new avenues for bilateral trade.”I am looking forward to experiencing at first hand the mood of economic upswing in your country which I have heard so much about,” he replied from Bonn to questions e-mailed to him. Germany is India’s largest trading partner in Europe with bilateral trade at about 16 billion Euros.
Dr. Steinmeier said this year’s UN General Assembly session will be significant for India and Germany, that together with Japan and Brazil form the ‘G-4’ bloc pushing for UN Security Council representation.”The Security Council no longer reflects today’s geopolitical realities,” Dr. Steinmeier says, “We believe that 2015, 70 years after the founding of the UN and 10 years after the last reform could be the right time to move forward.
” PM Modi has already met with the Brazilian and Japanese leaders in the past few weeks, and will address the UNGA on September 27th. Germany is also hopeful that the NDA government will reconsider the bid for MMRCA fighter aircrafts, a $20-billion deal that is being negotiated with France’s Dassault. “We believe that the Eurofighter Typhoon consortium has made a good offer, and we support it,” Dr. Steinmeier said, but that Germany respects India’s final decision.
Dr. Steinmeier landed in Delhi from Afghanistan, where he met with competing presidential candidates Abdullah-Abdullah and Ashraf Ghani, calling for them to form a unity government once UN-audited results of the 5-month old elections are announced, around September 10th.To a question on the ISAF pullout later this year, he said the mission will be replaced by mission “Resolute Support”, to continue training and equipment support to Afghanistan, something he said he will discuss in India as also the crises in Ukraine and Iraq.
On Sunday, the German FM will inspect a Delhi Metro (DMRC) construction site that has been helped by German drilling equipment, before going on to visit a heritage site near Humayun’s Tomb that Germany funded the restoration on, and a Kendriya Vidyalay school on the German language network (Deutche Shulen), where he will meet HRD minister Smriti Irani.