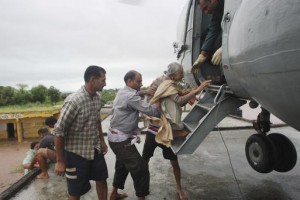 NEW DELHI : Prime Minister Narendra Modi on Sunday reviewed the flood situation in Jammu region at a high-level meeting attended by Chief Minister Omar Abdullah and top officials.Modi, who arrived here this morning, held the meeting at Jammu’s Technical Airport and was briefed by Abdullah on the devastation caused by the floods which have claimed 116 lives, officials said.
Around 12,000 people have been rescued from various areas of Jammu by teams of Army and IAF till now with 184 columns
(75-100 personnel each) of troops and 23 helicopters and planes of Air Force carrying out rescue operations.Meanwhile PM announced special assistance of Rs 1,000 crore to flood-affected Jammu and Kashmir.Flood fury on Sunday maintained its grip over the state leaving 138 dead and many marooned as the swirling waters inundated the Army cantonment, Civil Secretariat and the High Court in Srinagar and snapped road and communication links.
“After reviewing the situation, the Prime Minister decided to visit Jammu and Kashmir to personally assess the gravity of the situation and understand the problems being faced by the people,” it had said.“I appeal people not to panic and stay above water level, we will definitely reach out to them. It will take an hour. We will reach them and take them out. We are taking all measures to reach out to maximum number of people to rescue them, Omar told reporters.
“In case of Jammu, the water level is decreasing slowly. We will now focus more on relief and rehabilitation than on rescue efforts. The situation is slowly going back to normalcy in Jammu while in Kashmir the situation has become worse. Especially the situation is still bad in Srinagar. Our priority is to save people, have talked to Cabinet Secretary in the morning for boats and rescue teams,” he said. 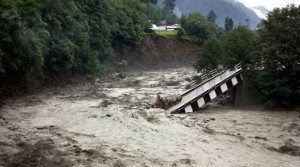 During the meeting with the Prime Minister, Omar sought additional rescue material for the flood-hit and the need to commence air rescue operations in view of the grim situation.Omar said the Cabinet Secretary has assured him that at least 40-50 boats will be sent to Srinagar and they are being brought from Patna, Gandhinagar and Ghaziabad.
Along with rescue teams, divers, flood lights and search lights will be sent so that rescue efforts could continue during the night, he said.
Divisional Commissioner, Jammu province, Shant Manu informed that “As many as 127 people have died so far in flash floods, house collapses and landslides in Jammu region”.