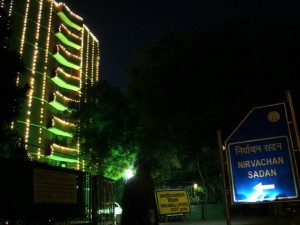 NEW DELHI: Ruling BJP and opposition Congress have supported corporate donations for political entities even as various other parties have supported a ban on the same.
The differences on the issue came to the fore at a recent consultation on electoral reforms.An Election Commission draft ‘outcome paper’ on its recent consultations on political financing and Law Commission recommendations on electoral reforms have said there is a “general agreement on ban on corporate donations to political parties, candidates and electoral trusts (excepting dissent on this issue by two national parties”).

BJP secretary Arun Singh, who represented his party at the day-long consultations, said corporate funding should be allowed as per the prescribed rules.
As per the rules, corporate contributions to political parties are allowed as long as the non-government company is three-years old, its aggregate contribution in every financial year is below 7.5 per cent of its average net profits during the three immediately preceding financial years and, it is authorised by a Board of Directors’ resolution.
“We have not opposed corporate funding. The issue of such funding should be discussed in a smaller group where only the six national parties are represented,” he told .
He said in the March 30 consultation that there are a number of smaller parties which are not represented in state Assemblies or Parliament. BJP, Congress, BSP, NCP, CPI and CPI(M) are the six recognised national parties.
Meanwhile, AICC Communication Department in-charge Randeep Singh Surjewala, who represented Congress at the consultations, said there should be corporate funding in a transparent manner.

“We are in favour of corporate funding through cheques. Otherwise, funding by cash will only give rise to black money. Cheque (payments) will ensure that the information on funding by corporates is in the public realm,” he said.
H.S. Brahma, who retired as Chief Election Commissioner on Saturday, had told reporters after the consultations that “there was a broad consensus that there should be no corporate funding of political parties and instead a National Electoral Trust under the control of the EC should be set up for corporate donations”.