KATHMANDU : In his first public speech on the country’s foreign policy, Nepal’s Prime Minister Sushil Koirala said China and India are top foreign policy priorities of his government.In a briefing to the diplomatic community in Kathmandu late Thursday evening, Koirala said his government would not allow any activities from the Nepali soil against the neighbouring countries, news agency reported. 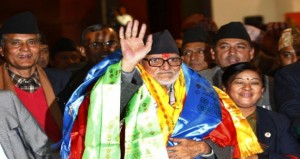 Koirala, who assumed the office of prime minister 10 February, has hitherto been silent about the foreign policy of the new government.  ”Recent years have witnessed profound changes in the dispersal of geopolitical and economic power in the world,” Koirala said. He added that China and India remained the focus of this unprecedented transformation.
In an interview with reporter, Foreign Minister Mahendra Bahadur Pandey said that Nepal wanted to maintain a dignified relation with neighboring countries.“Nepal’s proximity to two powerful ancient civilizations, which also happen to be the two fastest growing economies and rising global powers, gives it a greater future ahead,” the prime minister said while briefing ambassadors about Nepal’s foreign policy.“Based on contemporary pragmatism and ground realities, we wish to work closely with our neighbouring countries for unlocking the dormant potentials for common benefit,” he added