NEW DELHI : Taking on Congress president Sonia Gandhi for calling him a person of “low thought”, BJP prime ministerial candidate Narendra Modi on Friday accused her of “stooping low” due to impending defeat in the general elections. 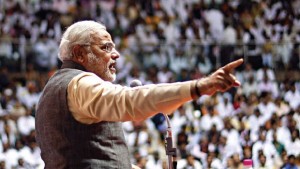 Addressing his 12th and last Bharat Vijay 3-D rally, Modi said he had suffered “intolerable pain” due to such allegations during the campaign but charged the Congress with “having lost its base” and having “no determination” left to put up a fight.Responding to Gandhi’s allegation, Modi contended that his thoughts revolved around generating employment for the youth, right remuneration for farmers for their produce and no repeat of the ‘Nirbhaya’ (the Delhi 16 December, 2012 gang rape) episode, among other issues of national importance.
“If thinking all this is to be of a person of low thought, I accept it,” he said. He in turn accused Gandhi and her party of practising the politics of “untouchability”. ”You are the president of the Rajiv Gandhi Foundation. Its economists study good governmental practises and award the. Three of your top economists gave Gujarat the award for being the best model of governance four to five years back. You sacked them,” Modi said.
Citing another example, Modi said that a minister from Congress-ruled Kerala was chastised by chief minister for praising the Gujarat model. “Is this democracy?” he asked. Responding to Congress’ allegation that he gave other backward class status to his caste in Gujarat, he said decisions about such matters had been taken by the Congress at the central level on the basis of “social, economic and educational parameters”.“My caste hardly counts in terms of numbers,” he said, adding the Congress was free to “damage” him but should not “abuse a numerically small caste”.