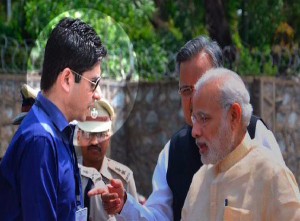 RAIPUR: Chhatisgarh government has issued notice to Bastar DM Amit Kataria for wearing sunglasses while receiving PM Modi on his visit on May 9.
“The act (wearing sunglsses) is in violation of the Section 3 (1) of the All India Services (Conduct) Rules, 1968,” the notice reads.
Clearing the matter, Chattisgarh Chief Minister Raman Singh said that only notice has been issued to the office. Only to tell him that it was against the protocol.
According to local media reports, when PM shook hand with the Collector, he asked the officer, “Mr Dabangg Collector, how are you?” These reports also suggest that Narendra Modi’s remarks sparked off debate on the dress code of IAS officers on VVIP duty.