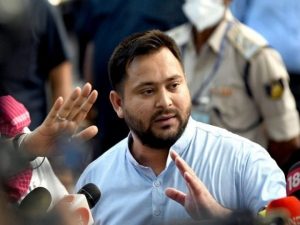 NEW DELHI: The Central Bureau of Investigation  (CBI) has moved Delhi Court against Bihar Deputy CM Tejashwi Yadav in IRCTC scam case. The probe agency has sought cancellation of bail granted to Yadav in the matter. The Special Judge Geetanjali Goel on Saturday after hearing the submissions of CBI, issued notice to Tejashwi Yadav and sought his response of him and listed the matter for September 28, 2022.

The IRCTC scam case relates to alleged money laundering in granting the operational contract of two IRCTC hotels in Ranchi and Odisha’s Puri to a private firm in 2006. The Central Bureau of Investigation CBI on Saturday moved Rouse Avenue Court of Delhi with the application seeking cancellation of bail against Tejashwi Yadav, Deputy Chief Minister of Bihar. The plea has been moved in the Indian Railway Catering and Tourism Corporation (IRCTC) scam case.
Earlier, the court had granted Tejashwi Yadav and others bail after taking cognizance of the charge sheet filed by CBI in the IRCTC scam case. The court noted that the case pertains to alleged irregularities in granting the operational contract of two IRCTC hotels to a private firm.
Former Union Railway Lalu Prasad Yadav and his wife Rabri Devi are also accused in the case. Lalu Prasad also served as Union Railway Minister from 2004 to 2009. Besides Lalu Prasad and his family members, former Union Minister Prem Chand Gupta and his wife Sarla Gupta, Agarwal, then managing director of IRCTC P K Goyal and then IRCTC director Rakesh Saxena were also named in the charge sheet.

According to the CBI, Tejshawi Yadav during a press conference held in August Tejashwi Yadav in a press conference had allegedly threatened CBI officers. CBI in its plea stated that Tejashwi Yadav had threatened the CBI officials while addressing a press conference, thereby influencing the case.
CBI sources said, “Agency has taken serious note of Bihar Deputy CM Yadav’s statement where he attacked the central agency stating, “Don’t they have a family’ Won’t they retire someday’ Will only this party remain in power”. This is one of the grounds on which cancellation is being sought. CBI had registered a criminal case against then Railway Minister Lalu Prasad Yadav, Tejashwi Yadav and others in 2017.
Addressing a press conference last month, Yadav had said, “Do CBI officials not have a mother and children? Don’t they have a family? Will they always remain CBI officers? Will they not retire? Will only this party remain in power? What message do you want to send? You should honestly discharge the duty of the constitutional organization”
Tejashwi Yadav had addressed the press conference after the houses of several Rashtriya Janata Dal (RJD) leaders were raided by the CBI in connection with the “land-for-jobs” case that alleges irregularities during his father Lalu Yadav’s tenure as Railway minister in the UPA-I government.
The CBI registered a case in July last year and carried out searches at 12 locations in Patna, Ranchi, Bhubaneswar and Gurgaon in connection with the case.
According to the charge sheet, between 2004 and 2014, a conspiracy was hatched in pursuance of which BNR hotels of the Indian Railways, located at Puri and Ranchi, were first transferred to the IRCTC and later, for its operations, maintenance and upkeep, it was given on lease to Sujata Hotel Private Limited, which is based in Patna. It is alleged that the tender process was rigged and manipulated and the conditions were tweaked to help the private party (Sujata Hotels).
It also claimed that Vinay Kochhar on February 25, 2005, sold commercial property in the form of three acres of land in Patna through 10 sale deeds for Rs 1.47 crore to Delight Marketing, in which Sarla Gupta was a director as a front benami holder on behalf of Lalu Prasad.
(Bureau Report with ANI Inputs).