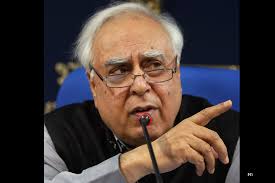 NEW DELHI : Law minister Kapil Sibal on Wednesday said any decision on banning opinion polls would be taken by the government only after it receives the law commission’s recommendations.
“The issue of electoral reforms in its entirety, which includes ban on opinion polls and advertisements in print media on the day of polls, has been referred to the law commissionfor its recommendation,” Sibal said in response to a question in Parliament. The law minister said the issue will be examined by the government in consultation with stakeholders.
Sibal said the election commission had earlier consulted stakeholders with most of the political parties favouring a ban on opinion polls.The law commission has indicated that its comprehensive recommendations on electoral reforms will come not before April and any decision could be taken by the next government.
Commission chairman Justice (retd) A P Shah had recently said that the panel will be able to submit its report on electoral reforms to the law ministry in April, when possibly the general elections will be under way. A ban on opinion polls would require amendment of the Representation of the People Act.
Prominent parties which sought a ban or restriction on opinion polls ahead of the Lok Sabha elections include the Congress, CPI-M, BSP, NCP, SP, AIADMK, DMK, JD-U, SAD and Shiv Sena.
The BJP, however, is opposed to any ban, saying it would amount to a restriction on the fundamental right of freedom of speech and expression.