KOLKATA: The last round in Bengal poll witnessed a huge turnout of voters – crossing 82
percent – but also witnessed bad old CPI(M) days of polling which was never without blood and
violence! 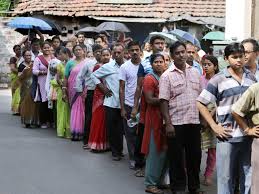 While polling in last 17 LS seats spread out in Kolkata and in a few far-flung districts, like
Nadia, South and North 24-Paraganas huge turn out was marred by violence and blood.
In Haroa in North 24-Paraganas a pregnant woman voter with three others got bullet injuries,
including 27 more people, were sent to local hospitals.
Just a little far from the back yard of Writers’ Buildings criminals threw bombs in Posta
Market (near Bara Bazar area) leaving victims bleeding.
The state Congress leaders, like, Pradeep Bhattacharya, Adhir Ranjan Chowdhury blamed
Trinamool Congress for creating an air of intimidation for voters.
So CPI(M) not to lose the chance blamed TMC and an “ineffective handling of situation’’ by
Election Commission though Special Observer Rakesh was on the move trying detect problem areas
and examining them.
But all VVIPs, Governor MK Narayanan, Chief Minister Mamata Banerjee and former chief minister
Buddhadeb Bhattacharjee cast their votes peacefully in Kolkata.
However, TMC insiders, leaders said: “We suspect a sabotage by CPI(M) planting goons to give
a bad name to ruling party.’’
But a TMC MLA was arrested this evening for his links Haroa violence which left 31 voters
injured, including party activists!