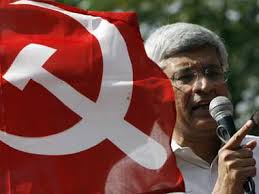 KOLKATA: As Naveen’s BJD and Jayalalitha send quick signals to BJP-led NDA following results of exit polls, indicating BJP entering seat of power in Delhi, but exit polls results’ indications in Bengal instead spread gloom, leaving state political majors worried and locked in grim post-poll calculations.
Most worried seem both the Trinamool Congress and CPI(M)-led Left camps! While TMC is in grim calculation of  advantages and disadvantages, the CPI(M)-led Left is getting worried about the fate of their much publicized political alternative in Delhi once results are out on 16th.
The numbers seem to have left both the majors worried, though the CPI(M)-led Left blamed Election Commission for `allowing a bad election in Bengal tainted with blood,’ but TMC leader Mamata Banerjee, much like the old CPI(M) leadership, took special interest in slamming `a section of media’ who allegedly painted the poll scenario bloody and resurrecting the bad memories of bad old days of CPI(M)-led Left rule, to fudge grim post-poll scenario and calculations from public eye.
Though there are hints which indicate however without official confirmation that not only `CPI(M),’ but a section of Delhi leaders in Congress `reportedly want TMC support to form an alternative front to thwart BJP-led NDA entering seat of power in Delhi.’
Incidentally, till now there isn’t any official backing of the hints, even Mamata Banerjee’s face book post was old a tirade against media, date 12th May.And CPI(M) state headquarters keep silent, but deputed its good speakers analyzing, though a little more to prove there wasn’t any Modi wave!“It was a manufactured media wave,’’ said a senior CPI(M) leader Manab Mukherjee, who faintly mentioned torturous inflation now got a parting shot with hike in diesel price set to trigger new inflation which might be a farewell gift to people.Apparently, Mukherjee was quite a degree more
softer on Congress which scripted jobless growth, inflation and helping only upwardly moving middle-class who are neither any more Indians nor accepted by a vast rural India as their own.And state Congress took shelter into a slogan popularized by Mamata Banerjee, “after all Modi is more known as a communal face.’’