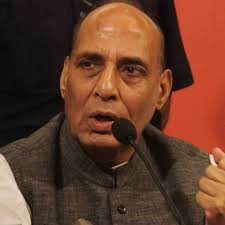 NEW DELHI : It’s been a hectic couple of days for BJP president Rajnath Singh, who made a dash to Gujarat to meet prime ministerial candidate Narendra Modi last evening and dashed right back to hold a series of strategic meetings in Delhi this morning. There have also been other meetings in the capital amid reports that big changes are on the cards in the BJP’s organizational structure as the party preps to form government at the Centre, with exit polls showing that it is headed, with its allies, for a clear majority.
Rajnath Singh met party colleague Saudan Singh and senior RSS functionary Suresh Soni and at his residence and they were joined later by Mr Modi’s chief aide Amit Shah, who has been part of all important deliberations in Delhi since yesterday. Mr Shah was also spotted at the RSS’ Jhandewalan office.The RSS or Rashtriya Swayamsevak Sangh is the BJP’s ideological mentor and plays a key role in crucial party decisions.
Sources said besides a possible party revamp, the RSS leaders also discussed the political situation that could emerge from tomorrow’s election results and how to get more allies if necessary.
Elsewhere, BJP vice-president Uma Bharti met senior leaders LK Advani and Nitin Gadkari.  One of the key decisions the party has to take is what role Mr Advani will play should the BJP form a government under Narendra Modi. Before flying to Gujarat yesterday, Rajnath Singh, Nitin Gadkari and senior leader Arun Jaitley had met Mr Advani and Sushma Swaraj, not among those close to Mr Modi, to reportedly discuss their roles.
The BJP’s parliamentary board, a group of 12 top leaders, will meet in the Capital on Saturday, a day after the results are announced, to sign off on key decisions. Among them, a successor for Mr Modi as Gujarat Chief Minister should he head to Delhi as PM. Also on Saturday, the BJP’s newly-elected MPs will formally elect Mr Modi as their leader.