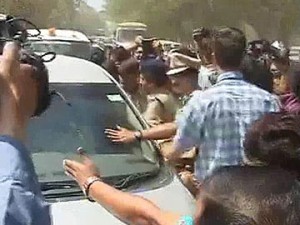 AHMEDABAD : Arvind Kejriwal’s white-hot tour of Gujarat notched a new controversy this morning – he was stopped by the Gandhinagar police from driving up to the residence of Narendra Modi, the BJP’s prime ministerial candidate.The police, who stopped Mr Kejriwal about two kilometres from Mr Modi’s home, said he could not proceed till he was granted an appointment. Mr Kejriwal’s close aide, Manish Sisodia, then visited Mr Modi’s office to seek an appointment but was told a packed schedule makes that impossible today.
This morning, Mr Kejriwal, who is the chief of the Aam Aadmi Party (AAP), announced that he would drop in to meet Mr Modi with a list of 16 questions that challenge the BJP’s claims of the hyper-development of Gujarat on his watch. As he waited for nearly an hour in his car near Mr Modi’s house, he justified his attempt for an unscheduled meeting. “What recourse do I have? They don’t answer questions, they don’t reply to letters. ”
“AAP’s Politics now includes the Right to gate crash, the right to a violent protest and the Right to take liberties with the truth,” tweeted BJP leader Arun Jaitley.Mr Kejriwal’s road-show in Gujarat, which began on the day national elections were announced, has been steeped in controversy. The Election Commission says he violated the code of conduct because he did not get prior police permission for his procession through the state; cars transporting him and Mr Sisodia were attacked; his brief detention at a police station resulted in extreme street battles between workers of his party and the BJP in Delhi and Lucknow.
Mr Kejriwal resigned as Chief Minister of Delhi 49 days after his party delivered an improbably strong result in the first election it contested. AAP says that if Mr Modi runs for Parliament from anywhere outside Gujarat, Mr Kejriwal is likely to stand against him.