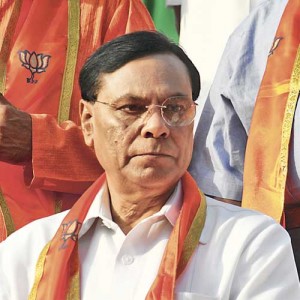 AHMEDABAD: In a sign of rebellion, seven time BJP MP and L K Advani loyalist Harin Pathak, who has been denied Lok Sabha ticket, today flayed the party decision and said he would consult his supporters before taking next step.Pathak, party’s doyen who represents Ahmedabad East seat, was denied Lok Sabha election ticket from his traditional constituency last night as the BJP replaced him with actor Paresh Rawal.
“The activities that have taken place in the party in last three months have hurt party workers. The party has been inducting Congress’ third grade turncoats, who have noisily criticised the party (BJP) earlier and they are even being felicitated here,” Pathak said.”I do not understand what was the need of this when Narendra Modi has a personality and when he is so popular,” he said.
“Party workers from Kutch to Valsad in Gujarat are hurt and distressed as they feel that real workers, who have given their life for the party, are being ignored,” he said.”I am also deeply hurt. Hundreds of my party workers are coming to me with this issue. In the next three days, I will consult my workers before deciding the future course of action,” said Pathak, a prominent Brahmin leader.
He further said that he spoke to party veteran L K Advani and Leader of Opposition in Lok Sabha Sushma Swaraj yesterday, when they called up enquiring about his ticket.”We cannot imagine functioning of Parliament without stalwarts like Advanji and Sushmaji,” he said.
“I will consult senior leaders before taking a final decision,” the leader said in reply to a question.Asked if he believed that Modi has become bigger than the party, he said, “Nobody is bigger than the party, party is big and party worker is bigger than the party as he makes it.” “This is the decision of party’s parliamentary board,” Pathak said when questioned if Modi was responsible for him being denied the ticket.
This is the second case where the BJP may face embarrassment after veteran leader Jaswant Singh yesterday assailed the party after it denied him to contest from his home constituency, Barmer.Pathak, a former minister in Vajpayee government, had won the first election as MP in 1989, when the BJP had a marginal presence in Gujarat.