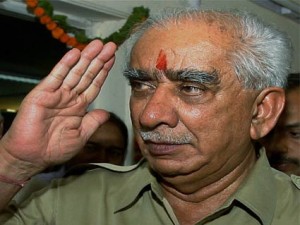 JODHPUR: Jaswant Singh , the BJP’s 76-year-old former union minister, has dared his party, saying he will file nomination papers tomorrow to contest elections from Barmer in Rajasthan. Mr Singh said how he will choose to contest will depend on the BJP. “Yes, I am filing my nomination papers tomorrow from Barmer. As an Independent or not, will depend on the party’s attitude,” he told PTI.
He is upset that his party of three decades has denied him his wish to contest what he calls his last election from his home constituency. The BJP on Friday named Col Sonaram Choudhary, a man who defected a week ago from the Congress, as its candidate from Barmer.
Mr Singh has reportedly abandoned the idea of resigning from the BJP, which puts the party in a spot.  If he does file to contest as an Independent candidate against the BJP’s official nominee, the party could be forced to expel him, which is likely to win Mr Singh sympathy at the cost of the party.
To give in to Mr Singh’s pressure and withdraw Col Choudhary’s candidacy will be a big embarrassment in high stakes election. Jaswant Singh has said he is insulted at the suggestion that the party would “adjust” him. “I am not a table, chair or furniture to be adjusted. The remarks smack of arrogance and are very insulting,” he said. “My honour cannot be subject to trading,” he had said yesterday.
Mr Singh’s party colleague Arun Jaitley had said yesterday, “It is unfortunate that we could not adjust him. The party will find some other option for him.”
Today Mr Jaitley wrote on his blog, without naming Mr Singh, “At times, the party may flood leaders with privileges and positions.  On other occasions, the leader may have to take “no” as an answer to his desires…He must accept the decision with a smile.  This becomes a test of his loyalty and discipline.”
On the other side of the party’s deep divide that stands exposed are leaders like Sushma Swaraj who said, “I understand that it is not an ordinary decision and there must have been a strong reason for it. But personally, I am hurt by this decision, reason be whatsoever.”