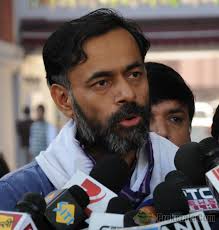 CHANDIGRAH : Aam Aadmi Party (AAP) has called for a probe against Robert Vadra, the son-in-law of Sonia Gandhi, often described as the country’s most powerful politician.
Yogendra Yadav, a senior leader of the AAP, has said that there must be an independent investigation into Mr Vadra’s land deals in Haryana. “Land-related corruption is the biggest issue in Haryana. There should be an independent inquiry against Mr Vadra,” the AAP leader told NDTV today.
Mr Vadra, according to a senior bureaucrat, benefited from sweetheart land deals in Haryana where Mrs Gandhi’s party, the Congress, is in power. The state government headed by Bhupinder Singh Hooda has declared it found no irregularities in Mr Vadra’s land deals, some of them with real estate major DLF.
Mr Yadav, 50, is handling his party’s campaign for Haryana. AAP plans to contest all 90 seats in the state legislature along with the 10 parliamentary seats that will be up for grabs in the national election that’s due by May.
AAP, founded by Arvind Kejriwal a year ago, made an unpredictable electoral debut in the recent Delhi elections, winning enough seats to put it in second place. Mr Kejriwal has formed the government with external support from the Congress.
The party’s repeated declaration of a war against graft has resonated among voters frustrated with a string of national financial scandals and the need to pay bribes in everyday life. Several professionals rooting for change have joined AAP in the past few weeks and the party has also approached those widely seen as ‘honest’ officers and other individuals.
Among them is Ashok Khemka, the Haryana IAS officer who cancelled the mutation of Robert Vadra’s land deal with DLF in 2012, alleging violation. Mr Khemka, who has accused the Congress government of targeting him ever since, has reportedly not taken any decision on joining politics yet. (IAS officer Ashok Khemka defamed Robert Vadra, says Haryana government)NDTV.