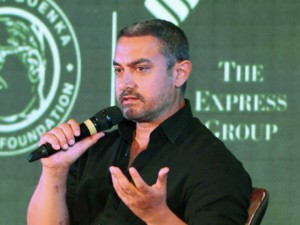 NEW DELHI: Actor Aamir Khan, joining the debate on a perceived “rise in intolerance”, has shared that he felt “alarmed” by a number of incidents and that his wife Kiran Rao even suggested that they should leave the country.The ruling BJP calls the comments “alarmist” and unfair.
“We won’t let Aamir leave the country, he is safe. This kind of comment influenced by a politically motivated campaign insults those who have given so much honour to Aamir in India,” said Mukhtar Abbas Naqvi, the Minister of State for Minority Affairs.

Kiren Rijiju, the Junior Home Minister, said the number of deaths in communal incidents had come down since the BJP came to power last year and “to make a blatant statement is not proper.”

Speaking at the Ramnath Goenka Excellence in Journalism awards on Monday, Aamir Khan said: “When I chat with Kiran at home, she says, ‘should we move out of India?’ That’s a disastrous and big statement for Kiran to make.
She fears for her child. She fears what the atmosphere around us will be. She feels scared to open the newspapers every day. That does indicate that there is this sense of growing disquiet, there is growing despondency apart from alarm.”
Mr Khan said it was important for political parties to take a stand and a “sense of insecurity grows when we don’t see that happening.”Incidents like attacks on rationalists, a mob killing over beef-eating rumours and controversial statements by members of the ruling BJP or allied groups have been held up by rival political parties and a section of the civil society as examples of intolerance under the current regime.
Prime Minister Narendra Modi, facing questions during his recent trip to Britain, said: “India is committed to protecting every citizen’s freedom, and the law will deal severely with those who are intolerant.”
Aamir Khan’s comments have provoked sharp reactions, even from veteran Anupam Kher, who has acted in many films with him.
Delhi Chief Minister Arvind Kejriwal had earlier tweeted in support of the actor, saying: “BJP should stop silencing voices through abuses and threats. It’s high time that Central government took concrete steps to instil sense of security among people.”