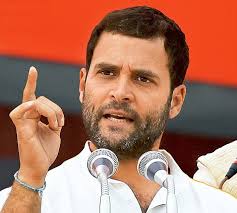 NEW DELHI: The Supreme Court today refused an urgent hearing on a plea seeking a direction to CBI to register a case against Congress Vice President Rahul Gandhi for allegedly declaring himself a British national before company law authorities in UK. A bench, headed by Chief Justice HL Dattu, said, there is no urgency in the matter.
The plea was filed by an advocate who had also urged the court to order registration of a criminal case against Rahul Gandhi for cheating and forgery. He also said that he filed a representation in this regard to the President and the CBI.
BJP leader Subramanian Swamy had recently accused Rahul Gandhi of evading questions on the issue allegedly involving him in the incorporation of a company in 2003.
The Congress Vice President had rubbished the allegations saying that he is prepared to face any investigation at any point of time. He said, he is even prepared to go to jail if any wrongdoing on his part is proved.