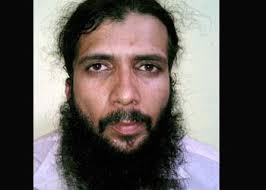 NEW DELHI : The National Investigation Agency’s charge-sheet against Indian Mujahideen co-founder Yasin Bhatkal reveals that the terror outfit has set up a new base in Rajasthan and recruited members “highly motivated to carry out terror attacks.”The group allegedly plans to target foreign tourists and has recced places in Delhi, Mumbai, Rajasthan, Maharashtra and Goa, according to the charge-sheet accessed by NDTV.
A new Indian Mujahideen module allegedly shaped up in Rajasthan after a severe crackdown on its Bihar unit by cops investigating blasts targeting Narendra Modi’s rally in Patna in October and Bodh Gaya in July.The agency’s 300-page charge-sheet filed on Thursday cites evidence from 2,500 pages of internet chats and the interrogation of Bhatkal and his associate Asadullah Akhtar, who were arrested in August near the border with Nepal.
Members recruited by the Indian Mujahideen in Rajasthan are allegedly in close contact with Riyaz Bhatkal, the Indian Mujahideen chief based out of Karachi in Pakistan. The group was previously known to recruit from Karnataka, Bihar and Bengal, but now seems to be inching closer to Delhi.After the arrest of Yasin Bhatkal, who was running Indian Mujahideen’s operations in India, two men have allegedly taken over his role, Tehseen Akhtar and Waqas.
Sources say the charge-sheet reveals that the global terror outfit Al Qaeda agreed to train Indian Mujahideen cadre, and in return, they wanted the group to “fight for the cause of the Rohingya Muslims” of Myanmar, and against Jews. Riyaz Bhatkal has allegedly traveled to the tribal belts of Afghanistan-Pakistan border to establish contact with Al Qaeda leaders.
They also allegedly planned to target Surat in Gujarat with nuclear warheads to avenge the 2002 riots in the state. The Indian Mujahideen, the charge-sheet reveals, tried to target Surat in 2008 with blasts but failed as the bombs were found and defused on time. Their next plan, allegedly, was a nuclear attack, with warheads from Pakistan.The investigators reportedly learned of the plot from an internet chat between Yasin Bhatkal and Riyaz Bhatkal in June.
In one of his chats with Yasin Bhatkal, Riyaz Bhatkal is reportedly heard using a derogatory term for the Pakistani intelligence ISI, indicating that they were unhappy with its control.