HYDERABAD: Irrespective of whether it wins or loses, there would be a generational change in Congress after the Lok Sabha elections, says Union Minister Jairam Ramesh who himself wishes to pursue his other passions in life.“We have to nurture youth. We have to get youngsters in and I think whatever the result of 2014, the face of the Congress is bound to change,” Ramesh told a news agency here.
Noting that Congress has fielded a lot of candidates in their 30s and 40s, he said: “It’s time for Congress to renew itself.”“In Rahul Gandhi, we have a young leader, and this is an opportunity for all senior leaders to say: okay…We will continue with Congress party but space must be given to youngsters,” the Rajya Sabha member said.Asked if he expects generational change in the Congress after the elections, he said: “100 percent.” 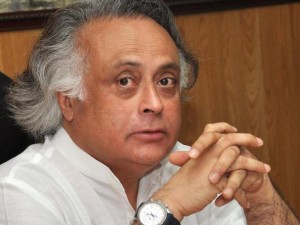 Speaking on the personal front, Ramesh said he crossed the age of 60 two weeks back and now wants to travel to countries around India, write more and mentor a generation of youngsters.“When you cross 60, I think it’s important that you become aware of your own mortality. And you are now entering the final phase of your life. And I would like to do my things.”
“I would like to travel more. My greatest regret is I have not travelled in Pakistan, Afghanistan and Iran. These are the places I would like to go and visit,” he said, adding he also wants to again visit Bangladesh, where he has not travelled extensively.Ramesh hasn’t done much writing in the past 10 years and he wants to write more.
“So, there are other options I would like to pursue. Of course, I will remain in Congress party, but at 60 I think it is incumbent upon me also to mentor a new generation of youngsters. That’s why I like to support youngsters, spot youngsters, bring them into politics and groom them in Congress culture…So, I mean, I will die a Congressman,” he said.
He said he sees his role increasingly as that of talent spotter, a mentor, helping youngsters…Next generation. “I should be an instrument for their political advancement,” he said.Ramesh advocated limiting people for two terms in Rajya Sabha and three terms in Lok Sabha, terming it a healthy trend.“The only way to develop new political leadership is to have term limits both in Upper House and in Lower House. In the Lok Sabha you can have three terms and two terms in Rajya Sabha,” he said.
He frowned on people going in for five-six terms in Parliament and then allowing their kith and kin to step into their shoes.“We need to mature as a democracy,” he remarked.