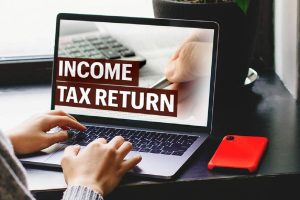 NEW DELHI : Taxpayers have requested the government to extend the due date for filing Income Tax Return as the deadline is approaching. The last date for filing Income Tax Return is July 31, which is just four days away. Many users have complained about technical glitches on the e-filing website. However, the centre has made it clear that there is no plan to extend the ITR filing due dates this year.

Many taxpayers are yet to file their income tax return while hoping that the government may extend the ITR filing deadline as it has done in the past. The last two financial years saw government extending the deadline for filing ITRs as COVID pandemic wrecked havoc. In a notification, the Centre on Saturday urged all taxpayers to file their income tax return by July 31.
Union Revenue Secretary Tarun Bajaj has made it clear that the government does not have any plan to extend the deadline. “So far, there is no thinking of extending the last date of filing,” Mr Bajaj was quoted as saying. He added, “last time, we had over 50 lakh (filing returns on the last date). This time, I have told my people to be ready for 1 crore (returns filed on the last day).”
The statement comes days after the All India Federation of Tax Practitioners (AIFTPs), an association of advocates, chartered accountants and tax practitioners, had requested the Ministry of Finance and the Central Board of Direct Taxes (CBDT) for an extension. Amidst the requests for an extension in the deadline, the apex body of CAs, the Institute of Chartered Accountants of India (ICAI), has announced not to make a representation to the Finance Ministry for an extension of the due date.
ICAI, on Monday, asked its members not to take any pressure for filing ITR while making it clear that it is “not in favour of making any representation for extension of any due date.” ITR Filing for AY22-23: The Income Tax Department as well as the government have been repeatedly saying that the deadline to file income tax returns will not be extended beyond July 31, despite receiving requests from taxpayers and associations to do the same. The government for the last two assessment years has been extending income tax filing deadline, but it has said this time that there will be no such extension for AY22-23.

Commenting on extending the ITR filing deadline, Bajaj said, “People thought the routine now is that dates will be extended. So they were a little slow in filling the returns initially but now on a daily basis, we are getting between 15 lakh and 18 lakh returns.
This will slightly go up to 25 lakh to 30 lakh returns.” Typically, return filers wait till the last day to file returns, he said.“So far, there is no thinking of extending the last date of filing,” he adde
All India Federation of Tax Practitioners (AIFTPs), an association of advocates, chartered accountants and tax practitioners, urged the union finance ministry and the central board of direct taxes (CBDT) to extend the ITR filing deadline by one month citing various reasons.
The Goa Chamber of Commerce and Industry (GCCI) has also urged finance minister Nirmala Sitharaman to extend the deadline to August 31. “Considering the difficulties faced by the smaller taxpayers, we request that the due date for filing of income tax returns for non-audit assesses be extended to August 31.
Taxpayers in general have been tweeting about the glitches faced by them while filing their income tax returns. They have accused the income tax portal of “not working properly”, “not opening”, “OTP issue”, “taking time, continuous loading then failing”, and demanded an extension.
The Income tax department on its Twitter handle has been reminding people to file taxes by July 31 as there will be no extension. The due date to file ITR for AY 2022-23 is 31st July, 2022. We urge you to file your ITR at the earliest, if not filed as yet,” it said in a tweet on Monday.
(Bureau Report with Agency Inputs).