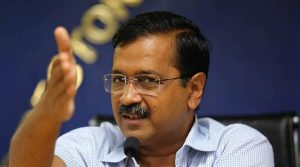 NEW DELHI: i  Delhi Chief Minister Arvind Kejriwal on Tuesday questioned the Gujarat government after more than 22 people died and 60 fell ill due to consumption of spurious alcohol in the state’s Ahmedabad and Botad districts. The state government has stepped up investigation into the matter; while the anti-terror squad (ATS) has been told to investigate the cases and a special investigation team (SIT) is likely to be set up.
Kejrwal, after condoling the deaths earlier in the day, was quoted as saying by news agency ANI:
“A very sad incident came to my knowledge that more than 25 people have died in Bhavnagar after drinking spurious liquor and several others are admitted to the hospitals. I wish them speedy recovery.” The Delhi chief minister is in Gujarat – his second visit in a week. “The question is that if Gujarat is a dry state then how is alcohol being sold openly in the state and who is benefitting from this? This is not the first time in Gujarat. Why is the govt not looking after this, or is there some conspiracy behind this?” he further questioned. In the Botad district, 16 people have died and over 50 are being treated. The purchase reportedly happened from the bootleggers on Sunday night.
Speaking to reporters, Gujarat’s Director General of Police said: “The crime has been cracked in less than 24 hours. Cases have been registered and 13 persons have been named, of whom a majority have been rounded up. Further investigation is being carried out,” he said. Gujarat is a dry state where sale and consumption of liquor is prohibited. Only those holding a permit issued by the government can consume liquor.

Addressing a public meeting in Somnath here, he said that there is no pro fissional tax in Delhi. With an eye to turning around his political fortunes in the state of Gujarat, Aam Aadmi Party (AAP) supremo Arvind Kejriwal has begun his temple run to woo the state’s Hindu residents and get them to  He visited the famous Somnath temple in Prabhas Patan near Veraval town of Gujarat. The Delhi Chief Minister offered prayers at the Hindu temple and later used the opportunity for media interaction and a photo session. While playing on the ‘soft Hindutva’ card, the official Twitter handle of the Aam Aadmi Party (AAP) posted an image of Arvind Kejriwal wearing a ‘rudraksha’ garland. The party supremo was also seen with a vermillion paste on his forehead.
In March this year, Arvind Kejriwal mocked the genocide of Hindus during his address in the Delhi assembly under the pretext of criticising Vivek Agnihotri’s movie ‘The Kashmir Files.’ He had insinuated that the plot is not grounded in reality and that it is a  (Jhuthi Film ).

“I was thinking what would have happened if Jawaharlal Nehru built temples instead of the Steel Authority of India? Would India have developed after Independence?” he said during a public address, mocking the construction of Ram Mandir.
(With Inputs from Ahmedabad).