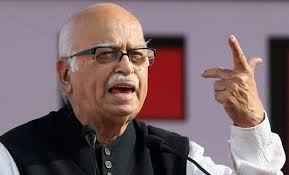 NEW DELHI :The BJP’s election committee meets again today amid the buzz that the party’s seniormost leader LK Advani could contest the general elections this time from Bhopal in Shivraj Singh Chouhan’s Madhya Pradesh rather than from Gandhinagar in Narendra Modi’s Gujarat.
Mr Advani, 87, has been the sitting MP from Gandhinagar for the last 16 years straight. The Gujarat BJP has recommended that he contest again from there. But the speculation that he could shift to Bhopal gained ground ever since the BJP did not announce a candidate for that seat when it released its list for Madhya Pradesh.
The BJP won a huge mandate in the Madhya Pradesh state elections four months ago.
Chief Minister Chouhan is seen as someone Mr Advani is close to and trusts. BJP workers in MP and the sitting MP Kailash Joshi have sought that the top leader contest from state capital Bhopal, where Advani posters have sprung up in anticipation.
LK Advani was also once the mentor of Narendra Modi, Gujarat Chief Minister and the BJP’s prime ministerial candidate, but they have not been the best of friends for years. Mr Advani had last year, in a protracted public sulk, opposed the BJP’s decision to name Mr Modi the party’s PM candidate, but has since made several speeches endorsing that decision.
The party’s 19-member election committee, made up of top leaders including Mr Modi and Mr Advani, has already met twice since last week to decide on candidates for the 450-odd seats that the party plans to contest in the 545-member Lok Sabha.Party sources say the committee aims to approve candidates for all remaining seats today, which would include some in Uttar Pradesh and all seats in Rajasthan and Gujarat.
At its last meeting, the party announced that Mr Modi would contest from Varanasi in UP, displacing another party veteran Murli Manohar Joshi, who has been moved to Kanpur. Today, the party is expected to announce a second seat for Mr Modi to contest, in his state.

Sources said he could contest from Vadodara, in central Gujarat, aiming to secure several seats in the region for the party, though there is also talk that he may pick Ahmedabad East.