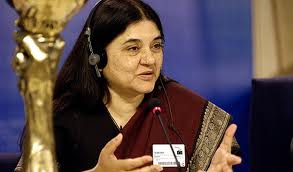 AMETHI: After BJP leader Varun Gandhi, praised the work done by his cousin and Congress vice-president Rahul Gandhi in Amethi, former’s mother and loyal BJP leader Maneka Gandhi cautioned young BJP leader to stay careful while making statements.Clarifying Varun’s statement, Maneka said, “What Varun Gandhi has said is wrong. I have been to Amethi. He should not speak before verifying the facts.”
Varun, Tuesday night said, “I want to bring a new form of politics. The way Rahulji has worked successfully in Amethi… though I haven’t seen his work from inside.”
Varun said that he had been told that programmes launched in Rahul’s constituency Amethi for empowering people were “fairly decent”.Though, after seeing the rising controversies, Varun took to Twitter and explained that he was not promoting anyone. Varun stated, “It should NOT be seen as an endorsement of any political party or candidate.”
However, his cousin and congress vice-president Rahul Gandhi accepted the compliments wholeheartedly and said, “Whatever Varun is saying is right,” Rahul Gandhi said in Rae Bareli yesterday. “I am very happy that other people are appreciating the work in Amethi.”