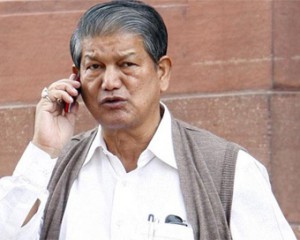 DEHRADUN: In a clear fallout over the rebellion by the nine MLAs, the Uttarakhand Congress dissolved all nine district units of the party in the state on Monday.Later in the day, 35 Bharatiya Janata Party (BJP) leaders from the state along with the nine rebel Congress leaders will meet Pranab Mukherjee today, asking him to dismiss the state government.
“Will tell the President to dismiss the current government in Uttarakhand as they have lost majority. Harish Rawat is now trying to buy people in a fit of desperation to gain support, but he will not succeed. It is his streak of corruption that has led to this situation,” BJP leader Kailash Vijayvargiya told News Agency ANI.
Uttarakhand crisis: Congress leaders quitting ‘sinking ship’, says BJPMeanwhile, rebel Congress MLA Harak Singh Rawat has written to Uttarakhand Governor KK Paul, urging him to call an Assembly Session tomorrow for the floor test.
Uttarakhand Chief Minister Harish Rawat who was set to arrive in the national capital today to discuss the political crisis in the state with the Congress leadership, has been asked by party vice president Rahul Gandhi to stay put and handle the situation there.

The Congress government in Uttarakhand is facing a major crisis with 9 MLAs rebelling against Rawat and the BJP, which has 27 MLAs, staking claim to form the government.Governor Paul has given Rawat time till March 28 to prove his majority and that has given time to Congress to deal with the nine rebel MLAs.

Uttarakhand Speaker issues notices to rebel Congress MLAsRawat had earlier asserted that Uttarakhand was his priority before anything else and if he was not able to prove majority, then he would promptly offer his resignation.
“I will prove my majority on the floor of the House. I am a democratic individual and the moment I lose my majority, I will offer my resignation. The BJP is flustered right now keeping 2019 in mind, which is why they are attacking our government,” Rawat said.

Lashing at out the Centre over the Uttarakhand power crisis, Congress vice president Rahul Gandhi yesterday asserted that the blatant attempt to topple governments was the true face of the party under the leadership of Prime Minister Narendra Modi.

“Toppling elected governments by indulging in horse trading and blatant misuse of money and muscle, seems to be BJP’s new model, after failure in Bihar. This attack on our democracy and Constitution, first in Arunachal and now Uttarakhand, is the true face of Modiji’s BJP. Congress Party will fight demagoguery with democracy,” the office of Rahul Gandhi said in a series of tweet.
In a strong rebuttal, Finance Minister Arun Jaitley stated that the Sonia Gandhi-led party had ‘lowered its level of ambition and was quite content in becoming the tail ender of any alliance’ be it in Tamil Nadu, West Bengal or Bihar.
“As far as Assam is concerned, we have formed an alliance and we are the leaders of that alliance. We will score a decisive victory there as we have significantly grown there,” Jaitley said.
Talking about the political crisis in Uttarakhand at the present, he added that there was a deep division prevalent within the Congress in the state and that could not be attributed to the BJP in any way.