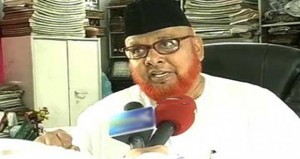 KOLKATA: : After the Anna Hazare fiasco, a Muslim cleric who is close to West Bengal Chief Minister Mamata Banerjee, has now dropped a bomb.Imam Barkati, the Shahi Imam of the Tipu Sultan mosque in Kolkata, says he approves of the strong words Rahul Gandhi uses against Narendra Modi and the BJP and wants Mamata Banerjee to make sharper attacks on them too.
The Imam, who had said at a massive Trinamool Congress rally on January 30 that Ms Banerjee should be PM, has now suggested that if necessary, she should support the Congress after the general elections beginning next month.“Just like Rahul Gandhi who is saying the BJP is poisonous, that they are dangerous. Mamata also has to speak more strongly. That’s what many Muslims are feeling. I also think if there is a coalition government, Mamata should go with the Congress,” Imam Barkati said.
Ms Banerjee’s Trinamool banks on the over 25 per cent Muslim vote in Bengal and has reacted with caution. “Again and again, time and again Mamata Banerjee has said she doesn’t want to see the face of any dangabaj (rioters),” said Mukul Roy, Trinamool general secretary and close Mamata aide, referring to the West Bengal chief minister’s assertion that she will not support Narendra Modi for PM.
The BJP is outraged. “An imam of a masjid is dictating to the chief minister and the chief minister is working according to his dictates. Nothing more unfortunate than that,” said BJP state president Rahul Sinha.
Ms Banerjee will have to do a fine balancing act. Her political partnership with Gandhian activist Anna Hazare came undone almost before it began. Mr Hazare, she has reportedly said, is already a closed chapter. She cannot afford to shut the door on the Shahi Imam.