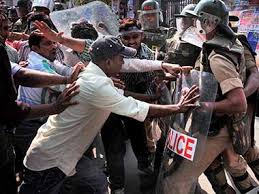 NEW DELHI : A barricade is all that separates lawmakers from Seemandhra and Telangana at the Andhra Pradesh Bhawan in Delhi, where all the action on the Telangana issue has shifted. Supporters from both sides of the political debate clashed this morning at the Andhra Bhawan, a short while before Andhra Pradesh chief minister Kiran Kumar Reddy stepped out to leave for his protest against the bifurcation of his state to create a new Telangana state.
Slogans of ‘Jai Telangana’ and ‘Jai Samaikandhra’ competed in decibel levels as security forces tried to keep the situation under control. Cops had a tough time keeping the Telangana supporters away as the Chief Minister and his supporters boarded a bus to leave for their protest.
Not far from Jantar Mantar, Reddy’s cabinet colleagues like Geeta Reddy had their own plans to sit on ‘dharna’ at Rajghat to demand that Parliament pass the Telangana bill in the session that began today, plans they have deferred after speaking with the party leadership. Both houses were, as expected, quickly adjourned after angry disruptions over Telangana this morning. MPs from different parties have threatened daily protests against the government’s decision to split Andhra Pradesh.
In a matter of considerable embarrassment for the ruling Congress, some of its own law-makers from the state say they will move a no-confidence motion against the PM over the issue. The union government has said Telangana, one of the three regions of Andhra Pradesh, will be made India’s 29th state. The other two regions, referred to as “Seemandhra” are virulently opposed to this and their representatives, including the Chief Minister, say they will fight the move. Most of these lawmakers, from both regions in Andhra Pradesh and across parties, are camped at the Andhra Bhawan in the heart of Delhi. As are other state leaders like the Chief Minister and Geeta Reddy. At other times, the Andhra Bhawan is a popular destination for those who want an authentic, spicy Andhra meal.