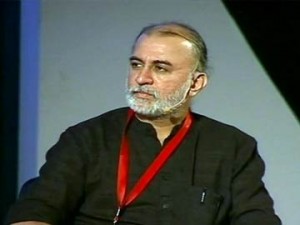 MUMBAI : Facing trial for allegedly raping a colleague, Tehelka co-founder Tarun Tejpal has moved the Supreme Court seeking bail on the ground that “the trial will take considerable time to conclude.”
In his petition filed through Karanjawala and Co., Tejpal has challenged Bombay High Court’s order rejecting his bail plea. The Goa bench of the Bombay HC had on March 14 rejected Tejpal’s bail application on the ground that main witnesses in the case were yet to be examined. Arrested on the charge of raping a female colleague at an event held in a Goa hotel, Tejpal has been in jail since 30 November, 2013.
The Goa Police had filed a charge sheet against Tejpal on 17 February, 2014 and in terms of Section 309 of Criminal Procedure Code, the trial, as far as possible, has to be completed within a period of two months from the date of filing of the charge sheet. However, advocate Sandeep Kapur of Karanjawala and Co. said, “The trial is likely to take a considerably long time as there are 152 witnesses cited by the prosecution. Also, there are contradictions in the prosecution’s case, which prima facie show Tejpal’s innocence.”
Tejpal contended he was not required for any further probe and if refused bail he would be unable to prepare his defence and exercise his right to a fair trial.  He also pleaded that his mother was critically ill.In Goa, Tejpal filed an application before the trial court on Wednesday seeking permission to visit his mother at his home in Goa, his third such formal request. The court will take up his plea on Thursday.  Tejpal’s mother is suffering from cancer and he had previously been allowed to visit her once in the hospital and once in their home.