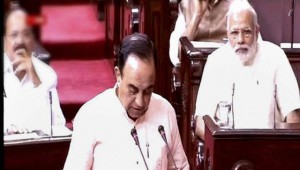 NEW DELHI: Congress members in the Rajya Sabha today trooped into the well of the House during the Zero Hour today taking serious objection to certain remarks made by nominated member Dr Subramaniam Swamy.
Chaudhary Munavvar Saleem of the Samajwadi Party made a reference to Aligarh Muslim University and urged the government to retain its minority character.
In this context, he recalled that Dr Swamy had supported the minority character of the University in the past. Responding to this, Dr Swamy said that he is not opposed to minority institutions. But, his objection is that they should not be funded by the public exchequer.
One of his remarks triggered vehement protests by the Congress members, who rushed to the well to express their displeasure.9999

Subramanian Swamy, who triggered protests from Congress on Wednesday over his attempts to drag Sonia Gandhi in the AugustaWestland helicopter row, on Thursday again made some controversial remarks in Rajya Sabha which the Chair immediately expunged and warned him of action for unnecessary provocation

Expunging Swamy’s reference to the Constitution of another country that triggered vociferous protests from Congress members, Deputy Chairman PJ Kurien also ordered media not to report the remarks.

He was countered on this by the opposition to which he responded by dragging the name of another country, a reference that led to agitated Congress members rushing into the Well. Kurien said he was expunging the reference to the Constitution of another country but that did not satisfy the Congress members who continued to shout slogans against Swamy.
“I will take action against you. Subramanian Swamy you are unnecessarily provoking. I will have to take action against you… you are provoking,” Kurien said.Observing that what Swamy said would not go on record, he said “what has been expunged should not be reported by media.”
Congress members sought action against Swamy with Jairam Ramesh saying he was “needling and provoking” by bringing in reference to another country. “This is deliberate.”

Asked by the Chair what the problem was when the remarks have been expunged, Leader of the Opposition Ghulam Nabi Azad said “the problem is the new gift of BJP. Problem is not on this side.”

He said Swamy is just two days old in the House and his remarks have already been expunged twice. “There are 365 days in a year, how many times are you going to expunge his words,” he asked the Chair.
Azad said Swamy does not know the difference between street language and parliamentary words. “He does not allow his hair to gray so he can learn and mature.”