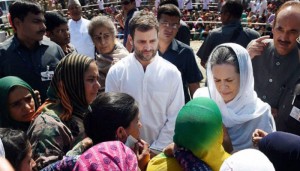 JAMMU: Congress president Sonia Gandhi will on Tuesday visit the flood-affected areas of Jammu region, a day after interacting with people in the flood-affected areas in Jammu and Kashmir’s Anantnag district.
She arrived in Srinagar on Monday with party vice president Rahul Gandhi, Congress leader Ambika Soni, Leader of Opposition in the Rajya Sabha Ghulam Nabi Azad.
The Congress president flew to Anantnag from the Srinagar international airport and met the flood-affected families. She visited the Dahrun Mantpora relief camp in Anantnag.”The Congress party and our family are with you in this hour of grief,” Rahul Gandhi told the affected people.
Sonia Gandhi also held a flood review meeting with the party leaders in Srinagar.